The Art of Paddling 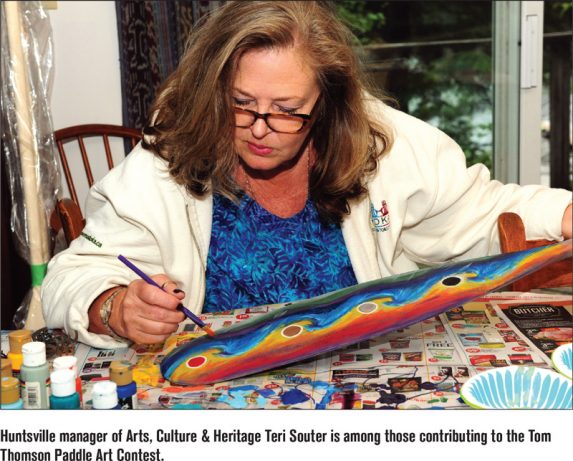 As you head out of the cities and into Muskoka, the forests seem to sprawl endlessly, skies open wide to embrace us and the lakes and rivers run wild with possibility.

One cannot ignore the notion to get out and explore the region, to become a part of it and be inspired by its secrets and its beauty. But to do so, you may require some outdoor equipment. One of the integral necessities is a paddle. Now, a paddle is the focus in Algonquin Outfitters latest contest to help commemorate the 100th anniversary  of Tom Thomson’s death and Canada’s 150th birthday.

Tom Thomson was born in Claremont, Ontario and grew up in Leith, near Owen Sound. He started his working life based in Toronto as a commercial artist working mainly  in black and white sketches for print advertising. He was an expert canoeist and an avid outdoorsman and picked up work during the summer months as a guide in Algonquin Provincial Park. This allowed him the time and freedom to focus on his subjects and whatever captivated him. He would often disappear for days to paint, in all weather conditions.

Thomson found peace and solitude on the lakes and in the forests of northern Ontario. Many of his greatest works were created at or near Canoe Lake on the west side of the park. He was an inspiration for many other artists, including the early members of the Group of Seven. These Canadian art pioneers were, at the time, finding new methods to portray the vast beauty of the Canadian wilderness while battling a skeptical public. On July 8, 1917, Thomson set off canoeing and disappeared on Canoe Lake in Algonquin Park. His body was recovered eight days later, however his paddle is still missing.

Randy Mitson, marketing director for Algonquin Outfitters, explains the paddle art contest was launched over a year ago at the Reel Paddling Film Festival, an international film tour presenting the world’s best paddling lifestyle films of the year.

“At the time, we were hoping to get at least 100 paddles back to include in the auction to raise money for two unique charities,” says Mitson.

Currently, there are over 700 paddles out now being transformed into works of art. “There are two types of paddles, an unfinished paddle blank, or a rough paddle blank that is thicker and better for carving,” he says. “Anyone can join in and create your own personal paddle. Let me tell you that there are indeed some bold and creative artworks. Paddles are still in the process of being painted, carved, wood burnt and produced in various other mediums.”

All paddles must be entered by Aug. 31. The contest culminates with an online auction and live event at the Algonquin Theatre on Sept. 29. It’s free to attend to view some of the exceptional and outstanding conceptions. There will also be some fabulous prizes from a variety of sponsors.

There are two artists not looking for a win. Janine Marson and Don MacKenzie, both of Huntsville, simply entered the contest to honour Tom Thomson and to showcase their passion for the landscape and love of art.

Drawing is Marson’s first passion but over the years, she has dabbed her brush in acrylics and a crossover technique with pastels. Most recently she has returned to oils.
“Tom Thomson had a whole way of dealing with places and people,” says Marson. “He wasn’t a complicated guy. Other artists respected him for that; they respected his truths and honesty, especially when he was doing his work. They may have had the training but they didn’t have the eye he did.”

Marson’s paddle is beautifully unique and every detail is quite symbolic. She explains that she wanted to create something special.

“More of a totem than a paddle,” she says. “I decided that I should paint a story that honoured Tom Thomson, his life and his art.”

After extensive research, Marson felt like she began to understand the legend behind the artwork.

“I felt like I was beginning to understand what had made him tick,” she says. “He was after the truth of what he saw and painted, and it was this pursuit of honesty and childlike wonder that made me want to embark on my own journey of discovery.” 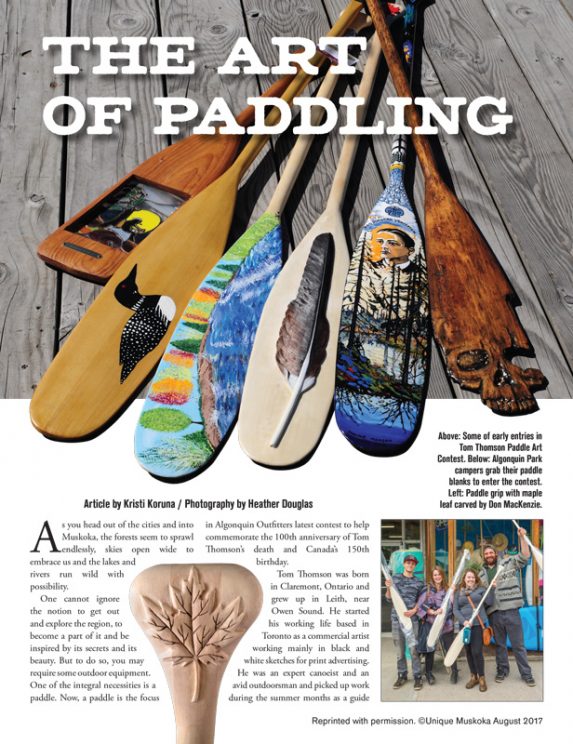 Don MacKenzie started exploring the world of art as a young child doing portraiture but was eventually captivated by carving, first in soapstone and then in basswood and tupelo. Born and raised in New Liskeard, Ontario, he grew to be a keen outdoorsman along the shores of North Temiskaming. Birds, colourful fall leaves and iridescent feathers became of particular interest and a focus in his artwork. His choice for the paddle art project was to carve down the paddle around the centrepiece.
MacKenzie explains that the process of creating his paddle submission was a very comprehensive and lengthy one. He began by drawing a full-size eagle wing feather on the blade of the paddle and a sugar maple leaf on the hand grip of the paddle.

“I chose to create the eagle feather because I felt this not only fit the blade of the paddle, but represents the strength and importance of the feather,” MacKenzie says. “A paddle was the strength that moved the canoe and both the paddle and the feather are symbolic of time and place.”

The next step, being the longest to complete, was to remove the wood from around the edge of the drawn feather to leave only the raised feather remaining. The entire paddle was then sanded and barbs of the feather burned into the wood. It was then sealed and painted.

“Once the leaf was dry, I burned ‘bug bites’ and the rest of the ‘decay,’” he explains. These elements are burned into the sugar maple leaf to make it look more authentic and as it would appear in nature. The paddle then received a final sanding and was sealed with two coats of varnish.

He adds, “What better way to honour the memory of Tom Thomson’s lost paddle than to recreate a paddle representing freedom and spirituality, and raise money for two very important charities?”

Proceeds from the art contest will be donated to the Town of Huntsville Fund for Future Acquisition of Public Art and Oxtongue Lake for Arts and Culture, a group devoted to celebrating and highlighting the ongoing connection of art, community and the beautiful environment surrounding Oxtongue Lake.

The Algonquin Outfitters Paddle Art contest is the perfect opportunity to reflect on our country, our landscape, what inspires us in our community and its natural surroundings. It reminds us of our heritage, our people and our history. Tom Thomson would no doubt be proud.