Spring ice out conditions in Algonquin Park can change quickly 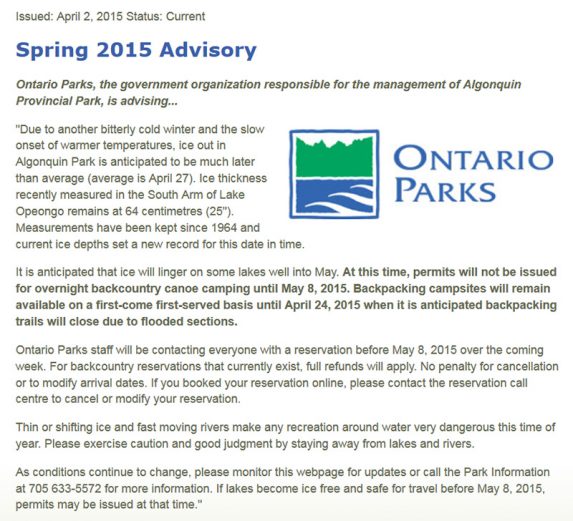 You may have heard that spring is bit late arriving in Algonquin Park this year.   The Spring 2015 Advisory announcement by Ontario Parks in early April advised that backcountry permits wouldn’t be issued until May 8th due to “Due to another bitterly cold winter and the slow onset of warmer temperatures, ice out in Algonquin Park is anticipated to be much later than average (average is April 27).” If you lived through this past winter like we did, this gloomy announcement probably had you thinking that spring would never arrive.

Last week (April 16, 2015), I embarked on an across Algonquin Park on a road trip to observe and document the progression of ice out. Warmer weather and observations by others had indicated that the ice and snow was starting to finally recede as mother nature loosened her grip on the lakes and rivers of Algonquin Park.  Although these predictions were true, conditions were far from ideal canoeing conditions inside the park.  It seemed like winter would continue for many more weeks to come.

That day, it seemed that Ontario Park’s prediction would come true. Many rivers were open in areas with high fast moving waters but lakes were still ice covered with only some signs of shoreline creep. “It is anticipated that ice will linger on some lakes well into May. At this time, permits will not be issued for overnight backcountry canoe camping until May 8, 2015. Backpacking campsites will remain available on a first-come first-served basis until April 24, 2015 when it is anticipated backpacking trails will close due to flooded sections.”

Spring in Algonquin Park may not be as far away as we thought just last week, as rain and wind on Monday April 20th caused much of the ice to start to break up.  Stay tuned for another Algonquin ice out update soon.

Lake Opeongo was still sleeping from a long winter nap, buried under a thick blanket of ice and snow that went from shore to shore, but showed signs of mild deterioration in some areas.   The photo below was captured on April 16th from the boardwalk and dock in front of the Lake Opeongo Permit Office.

Indicators on April 16th looked like the 2015 ice out date for Lake Opeongo may be later than May 7th, with the Park not issuing backcountry permits before May 8th.

Traveling west across the park conditions were similar with most rivers being open and flowing in sections but lakes being ice covered.

Costello Creek, along the Opeongo Road, showed signs of being open for some time with water fowl finding open water along it’s length and shoreline.  A couple of ducks, Canadian geese and even a pair of Hooded Mergansers seem to be making Costello Creek their home until more areas opened up. 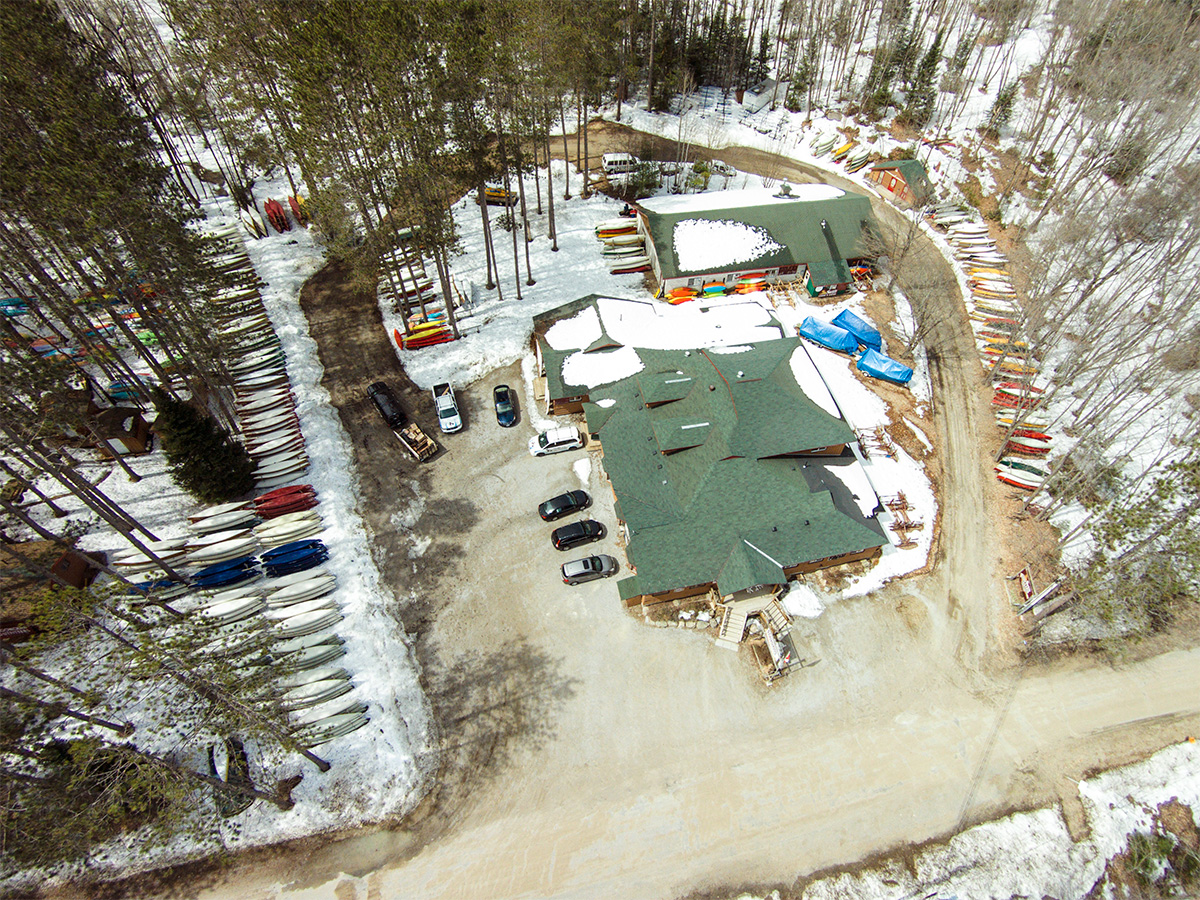 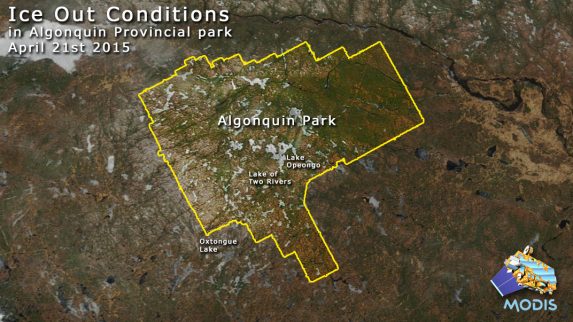 If you’ve followed our blog and ice out report for a few years now you’ll know that we often refer to the Modis Satellite imagery for an Eye in the Sky view of conditions across Algonquin Park.  The image below shows the April 21, 2015 conditions for Central Ontario.

Stay tuned as we hope to publish another Algonquin Park ice out update with in the next week as conditions are changing rapidly and already look much more favourable for a May 8th ice out on Lake Opeongo date. Until then you can visit some of the online locations below that also report on the ice out progression in Algonquin Park.

Notice about Current Conditions in the Park (April 21st 2015)

This information will be current through this weekend and conditions will be evaluated again next week.  Conditions in Algonquin Park continue to change rapidly, this time of year can be very dangerous to travel on or near the water / ice.  Water levels are fast and can rise / change quickly resulting in dangerous situations.  Many rivers are open but still contain sections of ice which make travel on them “suicidal”.  Please say clear of the waters edge this time of year.