Paddle in the Park

We found the 2015 Algonquin Outfitters Paddle hidden by Kevin Callan! 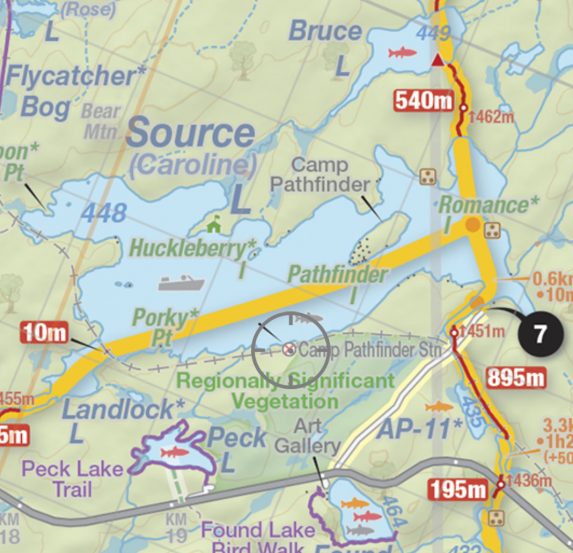 Having been following the clues for the 2015 Paddle in the Park Contest (PITPC) since the beginning I was pretty confident I knew the area where the Algonquin Outfitters Paddle was hidden. With the “lake of origin” mentioned in the first clue being Source Lake, it was the second clue about a “Great Saint” that had me stumped and doubting myself.

Either way, it had been long enough and I needed to try. So, I messaged my friend Will on the Wednesday to tell him we were going on an adventure to Algonquin in two days to find a paddle. Without hesitation he was in! However, not being familiar with the PITPC he did have a few questions about why we were looking for a paddle in Algonquin?? After 20 years of adventures or more often than not misadventures, I knew I had lost him at the word adventure and so after a quick explanation of the contest he was even more convinced and ready to go.

Now I don’t know how many times I must have read that the Madawaska River flows from Source Lake to the Saint Lawrence. However, right before we were to leave a light finally went off and I realized that the Saint in the second clue was the SAINT Lawrence (Yes, I’m slow). Unfortunately (or fortunately) for us we got a bit of a late start on the Friday and showed up to Algonquin 15 minutes past the cut-off allowed for a reservation into the interior. With thoughts of what might be we were directed to the Tea Lake Campground to regroup and wait for morning.

Setting up camp however at Tea Lake our disappointment quickly turned to a sense of adventure. With the answer to the second clue now in our possession and realizing that the first portage from Source to the Madawaska crossed the road into Source we decided why wait. So, with flashlights in hand and headlamps on we drove up to Source to see what we could find.

Walking down the road and arriving at the portage though we quickly realized that a large ridge ran all the way along the trail for as far as we could tell. It was decided that since this was my crazy idea I would walk the top of the ridge and Will would follow down below along the portage trail. So, with what seemed to be from the opening of a bad horror movie I made my way in the dark into the forest. After zigzagging back and forth across the top of the ridge for what seemed like forever Will joined me at the top for probably the third or fourth time to try and convince me that we should wait for morning. 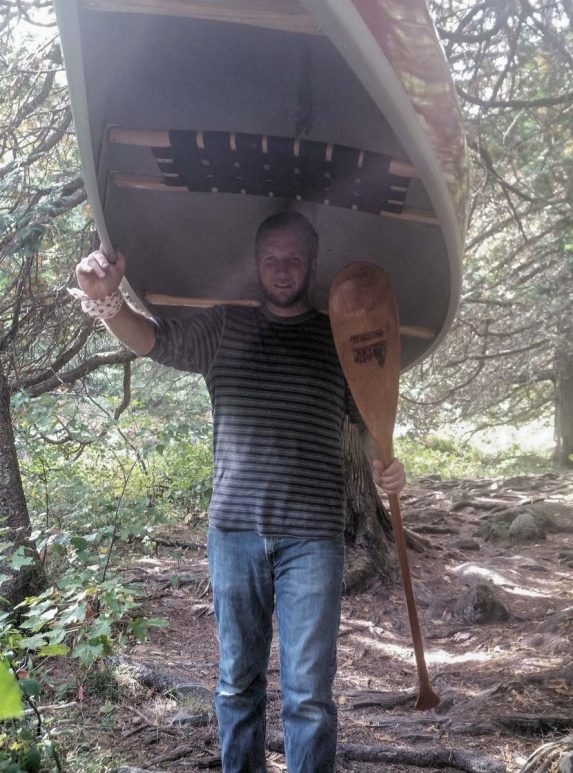 I had been too stubborn to give up the last few times but finally this time (well after a few more “just a couple more feet”), I had to agree. Turning to make my way down the ridge, completely dejected, I took no more than three steps and what do I see through the glimmer of my headlamp? THE PADDLE!!

Had I given up earlier and waited for morning, had I not taken those few extra steps, had he not convinced me to turn around and walk down the hill at that exact moment in time who knows what would have happened. Suffice to say though, there was some celebration back at camp that night and I may or may not have brought the paddle into the tent to cuddle with.

See for me it wasn’t just about finding a paddle or getting prizes (definitely a nice bonus though). It was a culmination of a few years that held a bit of a triple meaning in my journey to getting “out there”.

Starting from when I stumbled across one of Kevin Callan’s books (The Happy Camper) at my local library, picking it up and thinking I could do this. Then reading his books, articles and watching those videos we all love, in an attempt to learn what I needed to know to start my first trip.

Followed by me getting in touch with Gord from Algonquin Outfitter’s to help plan that first trip, absolutely amazing the knowledge and appreciation of the Park this guy has. Jake who runs their Brent store was also instrumental in getting us set up and on the water that first day. Seriously with the stories of the park this guy has I could have easily sat there all day listening to him talk. Oddly enough too, the only group that we encountered that whole first trip turned out to be Kevin and his family.

To finally the PITPC who got me out on my first solo canoe trip in 2014, when I made an unsuccessful run at that year’s paddle. Their message of “the rewards are out there” could not be more accurate and their goal of getting as many people out there is a very important one, if we’re going to ensure that we don’t lose these amazing natural resources we’ve been given.

That’s why that Paddle in the Park hidden by Kevin Callan and sponsored by Algonquin Outfitter’s ended up cuddled (ok fine I cuddled with the paddle) up next to me in the tent that first night. I’m just hoping my wife will be as lucky this year as we head out this weekend with a new group of explorers in search of this year’s Algonquin Outfitters “Portage Queen” Paddle.

Hope to see you all “out there” 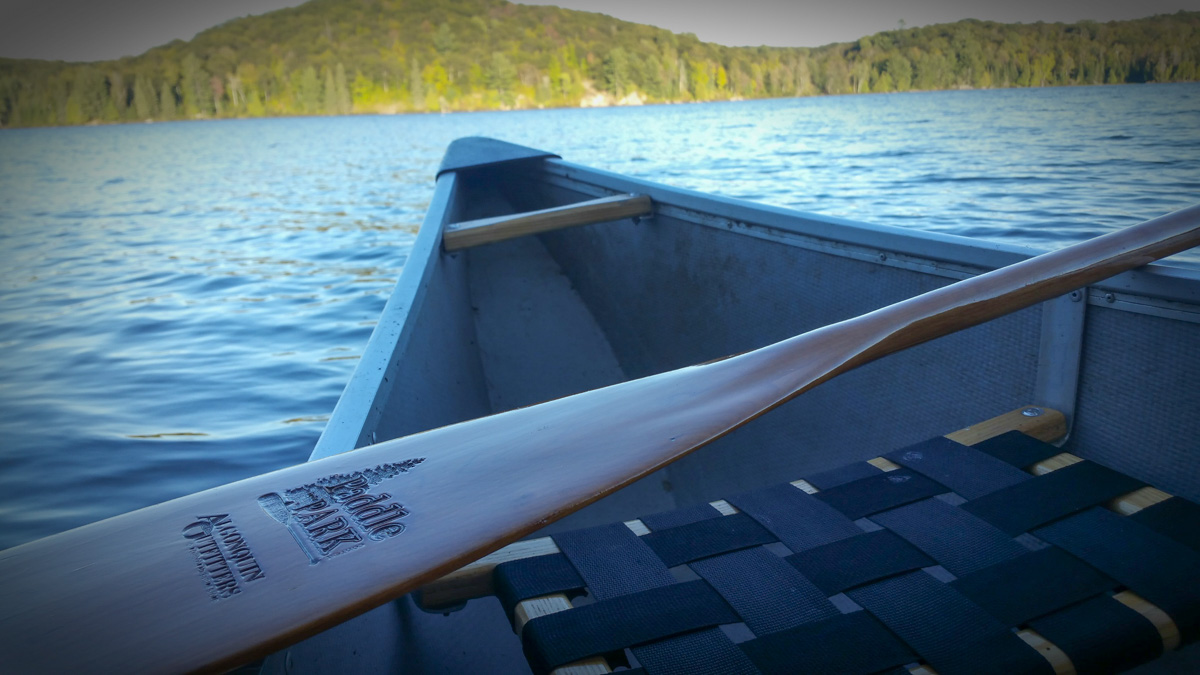 9+1 Rewards & Reasons To Get “Out There” This Summer

The Rewards are Out There 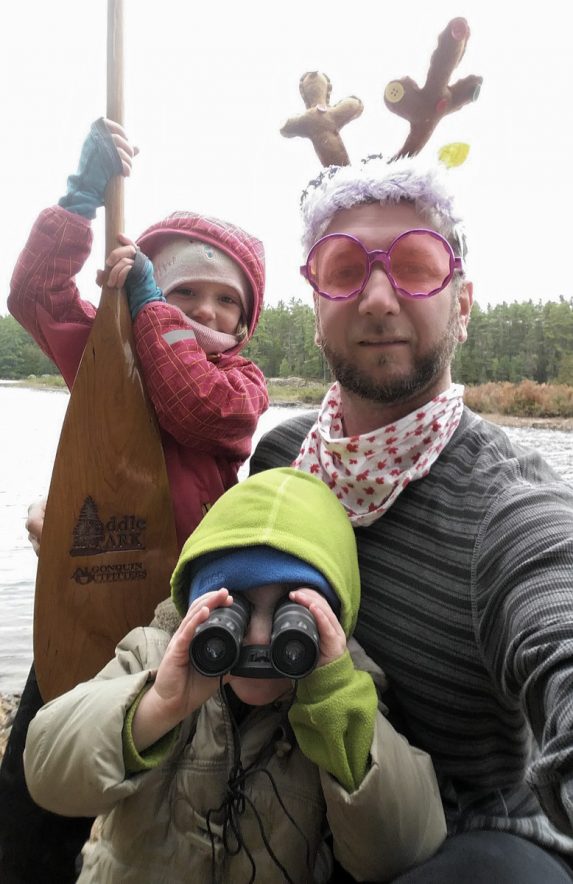 Husband, father and outdoor enthusiast who believes strongly in the protection of our environment and wildlife.  #leavenotrace

Paddle In The Park Contest – There has never been a greater need for society to unplug and reconnect all at the same time. The Paddle In The Park Contest was created to inform and remind people of the many rewards of getting outside, from the benefits we see in our health and well being, to supporting our parks and wild places. What better way to do this than with a chance to find a handcrafted (BADGER®) canoe paddle, hidden somewhere along the many vast water trails in Ontario?!  #TheRewardsAreOutThere