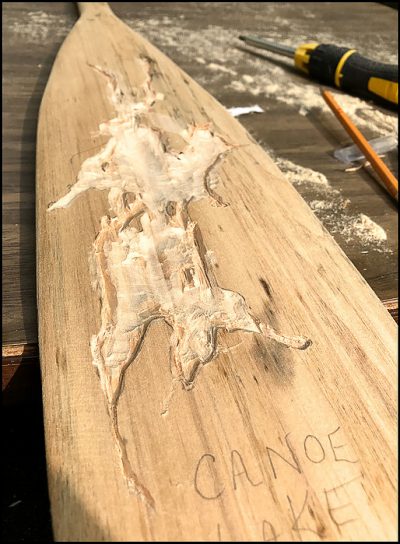 Tom Thomson is my artistic hero and I have been enjoying finding his painting locations for over a decade. I was extremely excited to learn about the Algonquin Outfitter’s Paddle Contest and set to work planning out trips to gather information and inspiration. This launched “the summer of Tom.”

July 8th was the memorial paddle on Canoe Lake, hosted by The Portage Store and @ttlastspring (the username of the man behind Tom Thomson’s Twitter profile). It was an eerie experience to float silently over the spot Tom was last seen exactly 100 years ago as he left the docks of Mowat Lodge and paddled to meet his fate. We hiked up to the cemetery, a spot that has provided me with much inspiration in the past, over to where the old Mowat Lodge used to be, and then headed across the lake to Hayhurst Point. None of these locations were new to me, but the 100th anniversary gave them more gravity.

A week later, I was off to see the McMichael exhibition, “Passion Over Reason: Tom Thomson & Joyce Wieland,” which was an amazing and inspiring show. Then it was off to Owen Sound. A first-time visit to The TOM Gallery was excellent. Seeing the Betwixt & Between exhibit as well as the permanent collection was a visual treat.

Leith was next, to see his family placed headstone, which was in a quiet cemetery near a stately oak tree. Down the road, his childhood home was set up on a hill, overlooking the Sound. These stops added a layer to my understanding of Tom; to think of him outside the park was a lens I don’t often focus with.

Then it was up to Algonquin many more times, sitting and sketching and preparing for my Canoe Paddle Art Show at the Visitor Centre. Painting paddles was very much on my mind, but the paddle for this competition still eluded me. I didn’t want to recreate something he had done, or go with an image of Tom himself.

My inspiration arrived on the shores of Canoe Lake. As I sat and looked out at the water, I thought about what Tom would have seen as he looked out from the same spot. It was intriguing to think about where he would enjoy going on the lake, and as a fisherman, where on the lake he would go to fish. It was then that I thought about creating a map of his favourite spots. This would be a map that he would have created, so the familiar labels of “This is where his body was found” would be absent. The next challenge was portraying the depth of the lake, so I carved out the lake and filled it back in with blue resin. I feel the transparency really lets you imagine what is in the water. Finally, I labelled the spots on the lake Tom liked to frequent. Winnie’s cabin is in red (interpret that how you will, for only Tom and Winnie really know why).

On the back, there is an inscription by “Tom”:  “Canoe Lake as I know it. Algonquin Park, 1917.” I hope you enjoy this paddle as much as I enjoyed the year-long process of creating it.