One tripper’s full-circle experience with Project Canoe: from first enrolling as a youth participant to guiding youth trips with knowledge and intention. Through the lens of Rohith’s story, here is what the PC mission is all about. 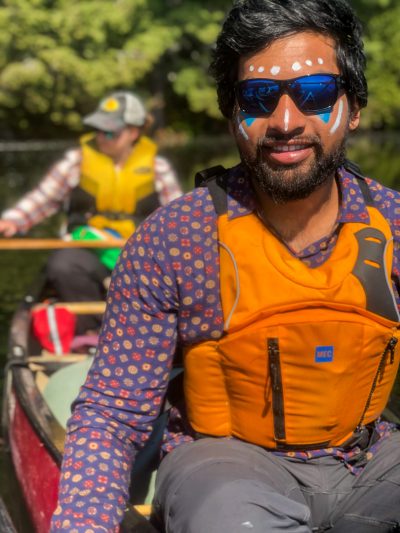 Rohith’s journey began at Sherbourne Health Centre, where he was first introduced to Project Canoe. He heard of an upcoming information session about backcountry camping; this was something he had only ever grown up watching and never imagined was truly attainable. Rohith became further captivated by the PC program when he learned that participants should disconnect from all electronics when setting out into the woods for five days. This five-day PC trip would be compassionately guided and dedicated to self-development, strengthening confidence, and better understanding the individual gifts that each of us holds. This was the first moment of transformation for Rohith; knowing that he was ready for a challenging journey like this, full of valuable life lessons, interpersonal problem solving and fostering community through the power of the outdoors.

After going through Project Canoe’s intake process and being accepted for the trip, Rohith experienced a muddled mixture of excitement and fear that filled his heart. Regardless, he began to prepare for the trip with joy! Rohith trip-prepped in a way that would allow him the most freedom and opportunity while being in Algonquin Park. “Thinking ahead to what the days might teach me, I decided not to bring a watch or any electronic devices. I wanted to wake up with the sun and fall asleep when I was tired from a long day of moving and learning”. Rohith set out on a trip with intention. He immediately experienced gratitude for the group that he was joined with; like-minded individuals who were also facing their own personal barriers, some of which were quite relatable. Before setting off, Rohith sought more confidence in who he was as a newcomer to Canada and an LGBTQ2+ individual. I suppose most of us reading this now would ask, how does time in the woods with PC fundamentally transform some of these barriers into open doors?

Let us fast-forward to how Rohith observes himself now after immersing himself into the PC community over the past two years. When asked how Rohith observes himself today, he paused and reflected on his PC experiences. “I now see myself as a curious, confident person who is driven by learning new skills and having the opportunity to mentor others, especially youth. I thrive off the ‘chaotic energy’ that youth bring to new challenges; my character seems to fit well into this dynamic”. Over time, research has shown us that both the natural world and feeling a sense of belonging within a safe community can empower transformations within ourselves. This trip did just that for Rohith. “Being new to Canada and exploring who I am alongside others doing the same allowed for a deep underlying understanding of one another and myself.”

As he tells it, it was day two of that first trip, and already some barriers were falling away, simply from the comfort of the Project Canoe community around him. The group started on Canoe Lake with Gillian (now PC’s Executive Director) and John as the trip leaders. A significant amount of foundation was set by them both, allowing youth participants to feel free and explore all the new sights and sensations. Now, as a PC trip leader looking back to his first trip as a youth participant, Rohith understands how strongly this foundation is set within staff before heading out into the woods with a youth group. For more reference, PC offers three different program types: Leadership, Summer Wilderness and Urban Programs. Across each of these programs are eight core values that PC is founded on: 1) equity and social justice, 2) the power of the outdoors, 3) strengthening communities, 4) learning from experience, 5) the importance of mentoring, 6) environmental stewardship, 7) sensitivity to personal situations and 8) discovering unique, individual gifts and strengths. In addition to embodying these eight core values as individuals, PC staff receive specialized therapeutic crisis training, a suicide intervention certification and various wilderness training. Having Gillian and John share this knowledge and support youth helped Rohith build trust and comfort exponentially faster than usual. It allowed him to step into his confidence, find his gifts, and feel the freedom to be who he was.

As day two continued along, the group was faced with rain on a long crossing. As the clouds cleared, a rainbow appeared in the distance. Rohith vividly remembers the group laughing about being “a bunch of LGBTQ2+ youth just paddling into a rainbow together”. The trip carried on, and many pockets of laughter and challenge folded in on Rohith. He was in awe of his growth each day and what he was able to experience within the elements of the natural world. Gathered by the fire, watching shooting stars under the night sky, and sharing stories until their eyes adjusted to the darkness, Rohith knew then that he would arrive home and begin working toward becoming a PC trip leader himself. Dedication and resilience indeed followed Rohith back to the city. As he mapped out his road to becoming, he was faced with challenges, but nevertheless, he continued to transform these barriers into open doors. He worked hard to complete the necessary certifications, training and even practiced his woodsman skills. He refined his mentorship style, kept an open mind, and worked hard at also managing his day job. Rohith was almost there, but not quite. He was figuratively and literally still treading water when it came to obtaining his Bronze Cross, and this here was the most significant stroke of transformation that he was about to undertake.

Rohith was a self-taught swimmer. He knew he could keep afloat, but he could not quite beat a timer. He completed the Bronze Cross theory with ease and moved onto his practicals shortly after. This was when he recognized the amount of work he was in for. “I understood that I had to swim 24 laps in under 18 minutes. On my first attempt, I tapped out after five laps, and on my second attempt, it took me 1 hour and 15 minutes to complete. I had my work cut out for me. I spent months in and out of my local YMCA training myself to swim. On about four occasions, Gillian met up with me at the community centre to teach me stronger techniques; I felt so cared for and encouraged. I was not going to give up”.

After four months of persistence, Rohith applied to be re-examined. On the first attempt, he came in 6 seconds over the timer. Despite falling short, he was proud of himself and confidently rebooked his exam the following weekend. Rohiths resilience guided him to success, and that weekend he hit the mark, timing in at 17 minutes 45 seconds. With this accomplishment, Rohith felt confident and ready for his first trip, where he would be leading youth through similar journeys to his own. Rohiths experience came full circle shortly after his triumph: delivering the Project Canoe intake presentation at the Sherbourne Health Centre, where his Project Canoe experience began. He went on to work as a Canoe Trip Leader for two summers and now continues to stay involved as an active member of the Program Committee. When finally asked where his happy place was, Rohith responded, “in the water.”

Project Canoe is a registered charity that has served over 4000 youth since 1977. The success of their programs is dependent on the generosity of a dedicated community of donors. To learn more, and support more youth in accessing these transformative experiences, visit their links below.