MUSKOKA – STILL WILD AFTER ALL THESE YEARS

Before white interlopers descended on this country, there were no political boundaries, no private property signs, just endless wilderness. Now, the wilderness is a rather vacuous symbol of what was…in most cases.

Not only that but, also, our backcountry is dissected into myriad constitutional or private boundaries with little attention to geography or landscape. Rivers are often managed (and I use that term loosely) within different political borders, counties or jurisdictions, and those in charge sometimes seem remiss regarding the importance of watershed protection. As a canoe route guidebook researcher, I have bravely disregarded partisan property in favour of a contiguous approach to the life of our precious water resources – connecting source to outlet.

After spending five years mapping out rivers in Manitoba, I moved to Muskoka. That was 25 years ago. I needed a rest. Muskoka was tame, relatively free of strife (one gets tired of receiving threats for championing northern wilderness) and a nice place to raise kids. Within the first couple of months, local canoe heads had swarmed my house and I was graciously accepted into the local canoeing cult. Even my Grade 12 math teacher (retired) tracked me down to run the Big East River in April.

“What?” I exclaimed, “There’s wilderness in Muskoka?” It was hard to believe, knowing well the typecast image that expounded an opulent cottage mecca, five-star resorts and endless golf courses slashed through the bush.

But after white-watering down the Big East (trudging through snowdrifts on the portages), I knew there were to be hidden gems of backcountry delights scattered throughout Hollywood north.

Luckily, the mayor of Bracebridge and councillor Murray Clark saw the benefit of a canoe guide for the Muskoka region. They even had money to invest in such a thing…go figure! With the turn of the new millennium (and the world never ended, and computers didn’t crash), I was out exploring new territory. But, here’s the thing: Muskoka is just a brand, like Haliburton, like Algonquin, like Almaguin. However, they all had something in common; with disregard to brand names, all water was born atop the Algonquin plateau, spilling out in all directions through various administrations. I didn’t care.

This was to be a Wild Muskoka guidebook, as if it were researched and written during a time when moccasined feet traipsed through the woods 500 years ago. Now, there are certain modern developments that couldn’t be overlooked, like power dams, roads, towns and the odd private property sign, but I really needed to explore rivers and lakes to the source – to the heart of Algonquin Park, that contiguous personality devoid of conscription into legal territorial entities. 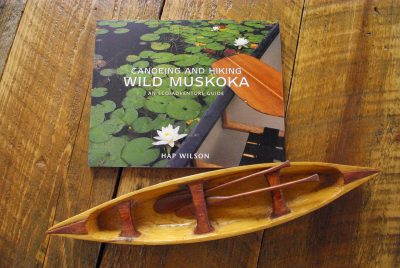 So, the guidebook was born 20 years ago and I had great fun putting it together. It was challenging, albeit life-consuming, while raising babies too. Many solo ventures that took me to all corners of the natural territory.

Wild Muskoka is really a compendium of waterways that leaves Algonquin and end in Georgian Bay, passing through Muskoka land on the way. And this is what makes Wild Muskoka so intriguing – the fact that the land and water is so diverse, from the highlands of Algonquin to the pine-studded, rocky islands of Georgian Bay. In no way can one downplay the adventure component that lay within this territory, regardless of how it may have been or is in the process of being developed. I was surprised as to the extent of how many quiet and secluded “wilderness” pockets survived the onslaught of the giant machine.

As for the canoeing culture in Muskoka (now I include the whole territory, as defined in my book), it is very much alive and well. There are reasons for this – history for one. When it was initially travelled by our First Nations People, this “nastawgan” or natural water trail network offered access to hunting and fishing resources (not to mention trade and strife and bloody battles between warring nations). Canoe routes were also used by early explorers like Champlain and Thomson. I would bet that most Muskoka boathouses have at least one cedar-canvas canoe hanging in the rafters (or amputated into bookshelves).

I have to say, with great respect and admiration, that Algonquin Outfitters, in its institution as a primary outfitter, has serviced the region royally.

Maintaining a traditional and modern approach to the outdoor trade, AO is responsible for the stability and permanence of the canoeing culture here in this region and beyond. There are other individuals too many to name who have helped to keep the ‘spirit’ alive, through art and writing, music and events; one of which I’d like to make a special mention.

Mike Verrier and Rob Horton, “two guys with day jobs and families,”  as they put it, created the Muskoka River X racing events seven years ago. I have had the good fortune to enter four times (placing twice), freezing my nuts off most of the time, battling metre-high waves on Lake of Bays or night hallucinations and getting a prize for carrying the most gear (they said to pack like you were going on an expedition!). The various River X events were successful; backed by Algonquin Outfitters and other suppliers, it was a racing event that evoked worldwide attention. It’s worth a mention that an event of this calibre raised the profile of Canada’s Premier Canoe Destination (not Quetico anymore…I think the sign fell down in ’78).

But, good things often come to a sad end. Mike and Rob recently sent out a “dear paddler” letter exclaiming that the race was no longer an option for them: “We began this venture, and continued with it, because of our passion for paddling, adventure, and interest in creating new opportunities and experiences for the adventure sport community…[suspending the race indefinitely]…reflects various unresolved barriers associated with our personal and professional lives concerning the considerable demands that we experience annually while hosting these events.”

I’m a trail builder. I know most people think trails just happen, but fail to see the work involved in building them. Like the canoe race that did so much for the regional canoe identity, the work involved and the dedication behind it is often taken for granted. Kudos to Mike, Rob, Algonquin Outfitters and all those crazy canoeheads who have kept Muskoka wild.

[UPDATE – Oct. 21, 2020: Organizers have decided to reinstate the Muskoka River X and a revised version of the event is being planned for 2021.] 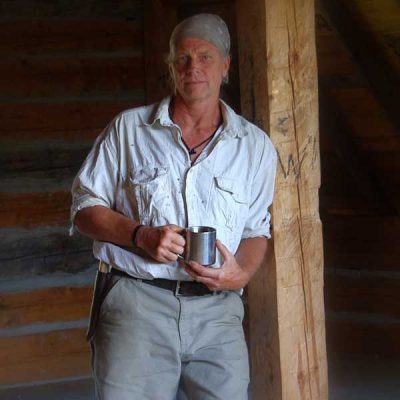 Hap Wilson is the author of 14 nature-related books and the recipient of the Bill Mason Award for lifetime achievement in river conservation, and is a co-founder of Earthroots Environmental group