Helle Knives – There are no shortcuts to perfection 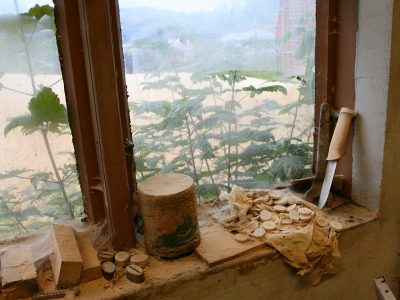 Helle knives are one of those products that’s going to last decades and maybe even be a cherished item that you can pass down to your future campers.  At Algonquin Outfitters many of the products that end up in our stores come from personal experience and a proven track record as true quality gear.  Joining the ranks of other great brands like: Arcteryx, Marmot, Olukai, Patagonia, The North Face, and Weterlings and Hultafors axes, to name a few.

Helle Fabrikker was established in the early 1930’s in response to hard times and the depression. The unemployed brothers Steinar and Sigmund Helle started making farming tools and other implements in the forge of their father’s farm. In 1932 they started making small sheath-knives which quickly became popular locally. Thus, the foundations of an important business in a typically Western-Norwegian rural area were laid.

As production increased they were forced to go further afield to sell their products. The first big sales journey was by bicycle to Oslo where knives were sold at 40 øre each. Only sheath knives were produced for the first 15 years, but in 1948 production of table knives started, closely followed by forks and spoons.

For the next 25 years, cutlery became the main product, but since the mid 1970’s, sports knives and forged knives for silver cutlery have accounted for most of the production base.

There have been changes (well, at least a few) – since Steinar Helle cycled over the mountains.

Surrounded by a wild and beautiful landscape lies Holmedal, a small village in Sogn & Fjordane county. Here, amongst mountains and fjords there is ample opportunity to enjoy outdoor life activities such as hunting and fishing, or collecting mushrooms and berries.

Outdoor life was probably not foremost in the minds of brothers Steinar and Sigmund Helle when they started knife production in the old forge at home on their farm in Holmeland in 1932 . Locally, their sheath knives quickly became extremely popular, and the foundations were soon laid for a small piece of Norwegian craftsmanship history.

The local market soon became too small, and new markets needed to be conquered. Steinar Helle packed his rucksack full of knives and set off on the long trip over the mountains towards the east. On a bicycle!

As there was no electricity in the village, the whetstones had to be spun manually during the initial period. When electricity arrived towards the end of the 1940’s it became possible to move production to larger and more suited premises. This did not mean that production became automated, however.

Then, as today, much of the production is done manually.
The Philosophy remains the same: Quality craftsmanship is best preserved by skilled craftsmen. Craftsmen with extensive experience and knowledge still take pride in making each and every Helle knife unique.

Today, Helle knives are sold all around the world, and customers receive the same quality whether professional hunter, scout or outdoorsman. A knife that is designed to meet the demands of the outdoors, and one that will last for generations.

Our knives are made to withstand the strains they are subjected to in the Norwegian outdoor environment.

That is why we use triple laminated stainless steel in our blades. This results in an almost unbreakable blade which stays sharp for much longer.  The steel we use is more expensive than in most other knife brands, but that is all a part of Helle’s philosophy of no compromise on quality.

Just like those great outdoor experiences, a Helle knife is made to last.

Do you remember your first bark boat? Your first home-made bow and arrow?

Or what about the first time you gutted a fish you had caught yourself? For a Norwegian, it is most likely that he or she would have used a Helle knife.  Whereas many knife manufacturers today depend on automated production and large product lines, we depend on quality and production through craftsmanship.  Since 1932, Helle knives represented the very highest traditions of quality in Norwegian craftsmanship.

Despite its aesthetic qualities, a Helle knife is not made to be an ornament.  It is made to be used.

A beautiful and stout knife, the Algonquin is designed for self-reliance and freedom in the wild whether traversing from jungle to tundra or just sitting around the campfire with friends.

Handmade in Norway using darkened oak, curly birch and red leather inserts, the handle shape features a slight pommel at the end, as well as a small finger guard and thumb notch for maximum dexterity and superior handling. The 69 mm blade is made with Helle’s triple laminated stainless steel for unparalleled strength, sharpness and corrosion protection.  Watch the video here.

Handcrafted using traditional methods that have been passed down for generations, the Arv Knife is worthy of inheritance.

The Dokka knife is a classic all-purpose folding knife and in fact the first Helle designed folding knife ever produced. It has a beautiful curly birch handle hiding the integrated steel liners. It is also one of a kind since it has the unique triple laminated stainless steel blade made by Helle.

The Dokka comes with a genuine leather pouch with an integrated belt loop.

The Eggen is one of our most used all-round outdoor knifes.

It is a stout hunting knife with a drop point blade of triple laminated stainless steel. The substantial curly birch handle is shaped to form a finger guard. It is gives a solid feel in the hand and is comfortable for both medium and large hands.

Helle GT is a knife with a substantial guard. It is a big knife, but the lack of pommel and the use of aluminum for the guard keeps the weight down.

It is an excellent choice for those who like a fairly big knife with a guard. The blade is made of triple laminated stainless steel. The knife comes with a snap type leather sheath.

The Harding is a traditional barrel handle hunting knife.

The beautiful, warm handle is made from curly birch and darkened oak separated by layers of leather. It has a full length tang. The blade is made of razor sharp triple laminated stainless steel. It comes with an embossed leather sheath with a handle butt retainer. A knife you will treasure.

Designed in collaboration with Les Stroud (aka Survivorman), the Temagami epitomizes decades of knife making craftsmanship and an extensive knowledge of the great outdoors. Like all Helle knives, the Temagami comes backed by a lifetime warranty. The semi-full tang provides the extra strength associated with bushcraft knives. The tang is exposed on the top and pommel end, but is covered by the wood of the handle on the finger side. This protects the fingers from direct contact with the steel in cold weather. The drop point style blade is made of triple laminated stainless steel that provides excellent edge holding toughness and ease for sharpening. The handle has a bit of a finger guard to help keep your hand off the edge when slippery. The handle shape on the updated version of the Temagami allows a better control of the knife when holding in more positions. The Temagami comes with a Scandinavian style pouch sheath retaining the knife securely without the need for snaps or straps.

View the entire Helle 2017 Catalog online at this link.

While in Norway, Les paid a visit to Helle, located on top of a viking burial ground in the rural village of Holmedal. Check out the video to learn more about Les’s visit along with the skilled craftsmanship that goes into making all of Helle’s prized knives.

Helle knives are designed to retain their sharpness as a lifelong outdoors companion. But it is still important to take care of your knife and its sheath.

Use a diamond tool or a wet stone for sharpening. Place the knife bevel flat to the sharpening tool and work the entire blade. Work one side until you can feel a slight burr on the opposite side. Switch side and repeat the procedure until you feel the burr on the first side. You have now established an edge.

Remove the burr by stroking the blade gently over the sharpening surface on both sides, as if cutting very thin slices. Keep the bevel flat towards the sharpener and move from side to side until the burr is gone.

If the blade is very dull or damaged, use a fine-grained grindstone and plenty of water and sharpen until you have a raw edge. Use much cooling liquid and never sharpen on a dry stone. A hot-ground edge looses its heat treatment and ruins the blade. 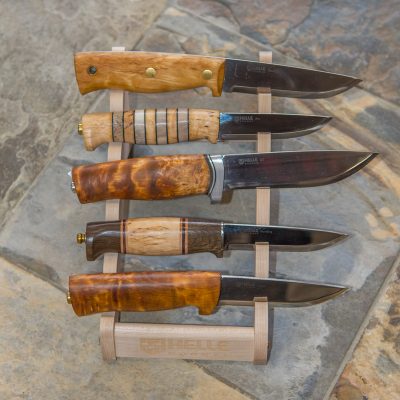 No machine can replace skilled craftsmanship

A Helle knife is made to withstand the stresses and strains that a knife is subjected to outdoors. Helle upholds its traditions of craftsmanship and quality rather than large product lines and automated production. We believe that quality is best preserved through skillful craftsmanship.

Skilled knife specialists take pride in making the Helle brand synonymous with quality. We use up to a half an hour to create a knife, as we want to be sure that your demands for quality and finish are met.

A Helle knife goes through up to 45 different manual operations before it is finally checked and packaged.

For more information about Helle Knives or other great outdoor gear contact:

The ALGONQUIN OUTFITTERS’ HUNTSVILLE 110 will challenge you to circumnavigate Huntsville’s 110km four-lake system in the fastest possible time! With only one portage intersection, this course is all about digging deep through a mixture of...
Sep
20
Mon
8:30 am 2021 Paddle Art Display @ Algonquin Theatre
2021 Paddle Art Display @ Algonquin Theatre
Sep 20 @ 8:30 am – 4:30 pm