They say it’s never an adventure until something goes wrong and that the journey is the true reward.

As clichéd as this sounds, I found myself repeating this sentence over and over in my head during one particular moment, 13 days into our three-week portage trip in Algonquin Park. My partner Karam and I set out for our adventure mid-September, after our one-night stay in a rustic tent at Oxtongue Lake, generously offered up by Algonquin Outfitters. The first few days were beautifully sunny and quite honestly, heavenly, with few portages and long windless paddles. It was still summer. The following week the weather turned, and the rain came in strong, refusing to leave for the remainder of our trip. 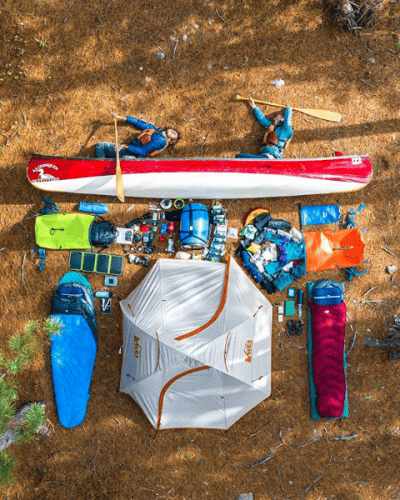 By the time day 13 came, we’d hit rock bottom. The sun had not come out significantly for the past seven days, all our gear was wet, we were lunch for the bugs, and we’d been reduced to the damp sock and sandal look. Exhausted physically and mentally from the previous day and the constant wet weather, we woke up groggily, both in bad moods. It was a morning of few words (except for a few shouts of frustration escaping Karam as he was swarmed by those early morning bugs). To say we hadn’t been looking forwards to this day would be an understatement, knowing we had a four-kilometre portage between Radiant Lake and Philip, translating to twelve-kilometers for us as we had too much camera gear to make portages in one trip.

Disgruntled but persistent, we loaded up Truffle (our beautiful AO Prospector 16 canoe), Setting off across Radiant Lake to begin our Paddle down the Little Madawaska and onto our first portage of the day. Sounds straightforward right? Not so fast. The waters were very shallow and better fit the descriptor of a stream than a river. After about an hour of battling up-current, often having to step out and pull/push/heave Truffle over a beaver damn or through a shallow area, we started doubting whether we were even on the right path as we should have found the portage by now. Seriously frustrated at this stage, we doubled back the way we came, on the lookout for the turnoff we suspected having missed (silver lining is that we were now moving with the current. Thirty mins later, we were no closer to figuring out where we had gone wrong, so we took the bold decision to scramble up the side of the river and join the train tracks that would take us along the road (running parallel to where the portage should have been). Doing this with two 60L dry bags, a food barrel and one slightly chubby (albeit ultra-light) Truffle was no easy feat. By this time, it was already early afternoon, and we could pretty much see where we had started off from that morning, five hours prior. We were forced to face the fact that we would not make it to Philip Lake and had to make the difficult decision to call it a day, returning to our previous morning’s campsite. Our rock bottom.

When you hit a low, you have to re-evaluate. Where did we go wrong?
What needs to change for us to successfully re-do today the following day.

We wanted this day to be over before it even begun, a mindset that set us up for failure. We created a monster of this portage in our minds, ignoring our tired bodies, and setting unrealistic expectations for ourselves. So we decided to change this. The shift didn’t come from us making more progress, it came from redefining what progress meant to us. We went into the second day accepting that any forward movement was progress, instead of measuring it up to the previous day’s expectations. This allowed us to move at our own pace, listening to our tired bodies, and shifting our mindset. We ended up exceeding our expectations the following day, we slept nearly ten hours, and made it the whole way to Philip Lake with just ten short minutes of daylight to spare, absolutely exhausted but overwhelmingly happy.

This entire trip was a big lesson in humility, accepting our physical and mental limits, knowing when and how to overcome them, constantly re-evaluating our expectations. When you are doing long outdoor trips you have to accept there are things outside of your control, relinquishing the control we are used to having in our everyday lives comes with its own kind of reward, both freeing and exhilarating. This is why we do this, to find comfort from discomfort, and learn from it.  Algonquin Park provided the perfect playground for this learning to unravel.  We will be back!

Elena is an outdoor/lifestyle writer (blog coming soon!) with a focus on slow travel. Go over to her Instagram woodfromthewoods to follow her adventures portaging through the park, biking across Vietnam, and surfing in Bali.