Get Badass and connect with the Mothership as we thrash the hill in Muskoka!  Join us at in Huntsville Hidden Valley Highlands Ski Area on Saturday Feb 18th for an on the hill demo featuring Capita Snowboards, Union Bindings, thirtytwo Boots and Dragon Goggles! 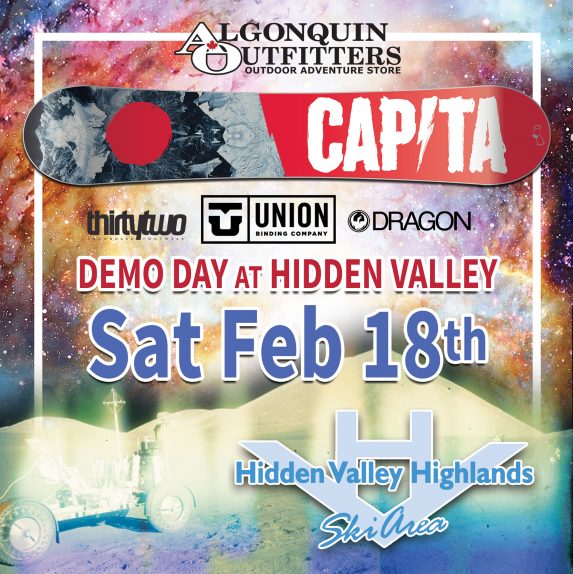 E.I.P. It’s our research and development mantra and the starting point for applied technologies at CAPiTA MFG. To move beyond the status quo means facing adversity and overcoming obstacles. Only in full acceptance of the idea that Everything Is Possible can progression truly take place.

The Austrian snowboard production facility is a product of both necessity and vision. Its short history is this: When the Elan factory shuttered in 2013, a number of prominent snowboard brands were left without a way to produce their line. CAPiTA was among those brands and stepped up to build a new home for production.
The home they created for these brands—which as of 2017 includes DC, Dinosaurs Will Die, The Interior Plain Project, Niche, Death Label, Allian, and Amplid—is not only producing some of the best snowboards on the market, it also stands as proof that efficiency and effectiveness in manufacturing and ecological and environmental consideration are not mutually exclusive concepts. The Mothership is the most sustainable large-scale snowboard factory on the planet.

The Indoor Survival is the most versatile board in our collection and is loved by a wide range of riders. These boards carve hardpack with ease, and they’re pre-positioned for pressing boxes and rails in the city or in the park. Due to the elevated contact points and mild rocker, they also float in powder amazingly well. They turn so easy, that beginner and intermediate riders love them for carving, but so do some of the best rail riders in the world for jibbing. And, they float in powder too?!?! No wonder the Transworld Good Wood Award winning Indoor Survival is a CAPiTA classic.

The Outerspace Living series feature a true-twin freestyle shape blended with a hybrid camber profile built for freeriding. Insipired by the award winning Mercury series, positive camber lies underfoot for power reten-tion while the nose and tail are elevated to help the board swim through powder and variable conditions. Forgiving when you want them to be, but strong enough to handle sticky situations, these decks excel when one board is asked to handle the in-bounds features of a resort and side-country conditions as well.

When it comes to soft-flexing, super poppy cambered snowboards, the CAPiTA Thunderstick is your weapon of choice. The lightweight, bombproof construction features cut-down tip and tail shapes for reduced swing weight, a new RFC Sustainable Select Core™, Low Temperature Plant Based EVO Resin, and upgraded inserts. New Age camber, which increases control and predictability with small zero cambered sections at the contact points, allows you to pop in and out of any features while going bigger and faster than all your friends.

One of the best urban and park boards in the game got even better for 2016. With a new RFC Sustainable Select Core, and proven Bitter End Deflection Tuning on the tip and tail, this Transworld Good Wood Award winner just keeps getting stronger. Featuring a throwback blunted shape with a shorter tip and tail for decreased swing weight, the Horrorscope allows you to size down without losing any performance. Team ridden, team designed, and the #1 selling board in CAPiTA history is a must-have deck for your quiver.

Designed as a women’s version of the Outerspace Living series, these perfectly balanced all-terrain freeride boards are stable, supportive, and poppy—yet forgiving and easy to ride at the same time. Featuring camber underfoot for controlled turns and a rockered nose and tail that ﬂoats in powder, the Paradise rides above the choppy stuff life can throw at you. With the true twin-tip design lines of a freestyle board and the camber theory of a freeride board, these boards offer conﬁdent ride-ability every girl will love.

The Micro-Scope is the perfect board for kids getting their first experiences in the snowboarding game. It features a unique convex shape with edges that are raised off the snow, so smaller riders (and their parents) won’t have to worry about catching an edge — keeping kids stoked and progressing for years to come. The construction makes for a lightweight and durable board, allowing kids to play on fun stuff like park jumps, bumps, boxes, and any freestyle terrain. Snappy, soft, and designed with a slight reverse camber shape, they’re everything you’ve come expect from a CAPiTA in a simplified, scaled-down version.

Designed as a “tween-age” destroyer, these boards form a bridge between the boys and the men. It’s here where the kids start riding better than their parents, if that hasn’t happened already. Inspired by the award winning DOA series, the Children of the Gnar series features a next-generation hybrid camber design that delivers the pop and response of a camber board with the predictability of reverse camber. Although this series is very forgiving and promotes skill building, it is no toy. The Children of the Gnar is the go anywhere, do anything freestyle deck for young shredders during those in-between years.

Starring the best team in snowboarding, the long awaited UNION BINDING COMPANY team movie is here at last! Shot entirely with RED cameras in 4K and above, STRONGER was filmed on location from the peaks of the Alaskan alpine to the streets of Finland, and all the best spots in between. Bringing together legends, veterans, and rookies, STRONGER delivers insane snowboarding from Kazu Kokubo, Gigi Rüf, Scott Stevens, Dustin Craven, Johnny O’Connor, Phil Jacques, Travis Rice, Dan Brisse, Anto Chamberland, Bryan Iguchi, Arthur Longo & Torstein Horgmo. Buckle up tight, because a crew like this has never been assembled in a major snowboarding motion picture.