Liam was our winner of the Swift Canoe, Cruise on Into Fall contest in the fall of 2018. Although he wasn’t able to make use of his full 5-day canoe trip prize this fall, he was excited to paddle the new Swift Cruise pack boat. We invited him to our Oxtongue Lake store to meet the Swift Canoe crew and their new solo performance Cruiser pack boat and to get out and test paddle the new Swift Cruiser 16.8. Below is Liam’s own story of when he brought his good pal, Ryan to test paddle a couple of new Swift canoes.

Liam Donohue – I’ll set the scene for you: the last weekend of October, chilly fall wind with a temperature in the low positives, and a lake as cold as a Yeti’s left foot. In other words, the perfect day to test paddle Swift’s Cruiser 16.8 canoe. I’ve been given the opportunity to take this boat out for a 5 day trip at some point in the next year thanks to Algonquin Outfitters Cruise on Into Fall contest, an opportunity I am so thankful for and extremely excited about. 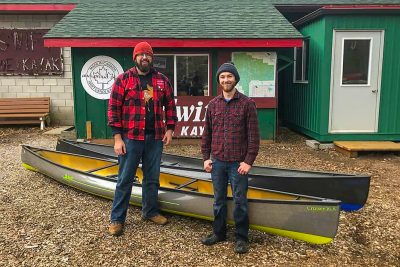 “But spring is so far away” I found myself thinking, “I can’t wait that long!” Thankfully, the good folks over at Swift Canoes were thinking the same thing. They invited myself and a good pal of mine, Ryan Sell, out for a day to try these boats, and get a feel for what I’m in for. So on a chilly Saturday morning, we packed up our gear, jumped in the car and headed south towards Huntsville, stopping only once for donuts at Tim Horton’s because they say breakfast is the most important meal of the day.  We arrived at Oxtongue Lake where we were welcomed by Scott and Carmen of Swift Canoes at the boatyard. They showed us the boats, set us up with gear for the paddle, and offered us butter tarts (which alone were worth the trip).

Now, my experience as a paddler has been primarily as a canoe tripper. Every boat I’ve ever tripped in has been an old beater of some kind, from the heavy indestructible aluminum Grummans of my high school years to the leaky $200 liability I currently trip in. I took part in the Mattawa River Canoe Race this summer, my first marathon canoe race, with a high school friend; and even for that, we used an older Prospector tripping canoe. So when I first saw the Cruisers, a couple of things went through my head. Namely “These are too nice for me to touch”. They were thin, elegant looking boats, and I was wondering how well I’d balance while sitting in one of them.

We picked up the two boats, one in each hand, and I was struck by how light they were. I’d be lying if I didn’t immediately assume it was witchcraft. But no, the weight of 28lbs each can be credited to the Carbon fusion material they’re made from (which I’m still not convinced isn’t some kind of witchcraft). Down by the docks we placed the boats in the water, zipped up our lifejackets and grabbed our paddles. Scott had given us both some kayak paddles, which I was hesitant to use. I haven’t done much kayaking, and I noticed from the first few strokes how I was getting water all over me. Scott and Carmen also pointed out how I was, in fact, holding the paddles upside down. I buckled and asked to bring my canoe paddle along. To paraphrase the motion picture The Ballad of Ricky Bobby: “Like the frightened baby chipmunk, I was afraid of anything different”.

It’s like I’d been walking my whole life, and just realized I could run. 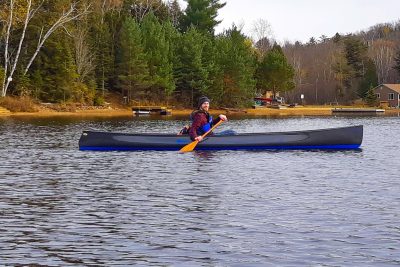 We puttered around the docks for a bit, getting a feel for these new boats. I learned pretty quickly that I had nothing to worry about when it came to stability; the boats were very steady. We took a few pictures, and then headed out towards the Swift teams suggested a route, an upstream paddle to Ragged Falls. We were paddling into the wind, and before long Ryan replaced his canoe paddle for his borrowed kayak paddle. I remained stubborn, and kept with my canoe paddle, though noticed how easily Ryan was passing me by in his Cruiser. It wasn’t until we were further upriver that I decided to give the kayak paddles another shot. The difference was immediate. After a few more practice strokes, I found out just how speedy these boats are. It’s like I’d been walking my whole life, and just realized I could run. We tried a few sprints, and I can honestly say it was a ton of fun just seeing how fast these boats could go.

…with the wind at our backs, paddling downstream and using the kayak paddles, the canoes moved like arrows from a bow. 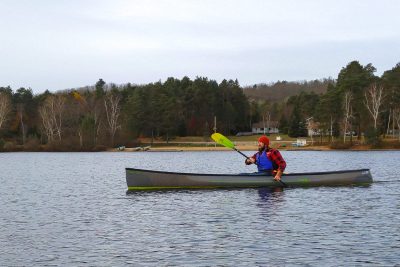 The paddle up Oxtongue River was beautiful. The chilly fall day meant we were the only ones out paddling. The river was often quiet, the silence occasionally broken by a sharp fall breeze; with golden tamaracks standing sentinel along the shoreline. The reeds and trees were alive with birds of all sizes, flying from branch to branch, prepping for the winter months. We yielded the right of way to a few groups of ducks who were making their way to do duck things. At one point we stopped to watch a small Mink swimming around the shoreline. We got to the falls themselves and spent some time at the bottom, taking pictures and enjoying the brisk fall day.

Heading back towards the docks, with the wind at our backs, paddling downstream and using the kayak paddles, the canoes moved like arrows from a bow. Several stops were made, simply to extend the time we had out on the water. We got back to the docks and spent some time taking even more pictures of the boats themselves, like the tourists we were. We were caught in this endless loop of picking the boats up, admiring the weight, putting them down and making comments like “Would you look at that”, or “Jeez, that’s pretty neat”. We brought the boats back up to the boatyard, thanked the Swift team for their hospitality, and the great opportunity before heading out.

All in all, it was a great chance to paddle these beautiful boats, which I would quite confidently call the Cadillac of canoes. I want to thank Algonquin Outfitters and Swift Canoes for the opportunity they have given. Spring can’t come quick enough, and I know these winter months will be filled with many a trip planning sessions, trying to decide: where will these canoes take us? 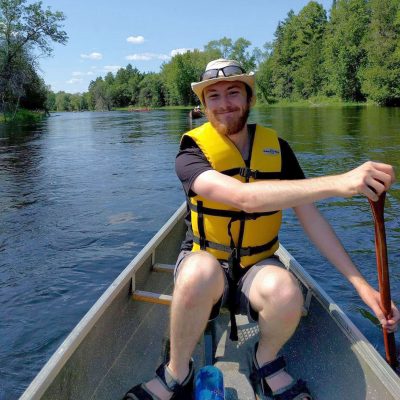 Liam is from the Ottawa Valley but currently resides in North Bay where he works in the Mental Health and Addictions field. Liam enjoys filling his free time with canoeing and taking pictures of weird fungi (thankfully most fungi look weird). Liam’s major motivation for canoe tripping is to find a good spot to do some reading. He’s fairly sure that if necessary, the most rabbits he could fight off at one time before being overwhelmed is about 30.