I had not been on cross-country skis in more than 10 years when I stepped into the Algonquin Outfitters Oxtongue Lake location last week to borrow gear! My friend Rebecca and I were keen to try the ski trails at Algonquin Provincial Park after borrowing fat bikes from Algonquin Outfitters the year before and riding around Mew Lake.

After getting us fitted for cross-country skis, poles and boots based on our height and weight, the helpful Algonquin Outfitters employee waxed our skis for us, demonstrated how to clip the boots onto the skis (and how to release them!), and gave us a quick refresher on the technique of classic cross-country skiing. She also stepped outside with us to show us where to find the Blue Spruce Resort Ski and Snowshoe Trails behind Algonquin Outfitters. We bought $10 ski passes at the store before heading out with our gear. 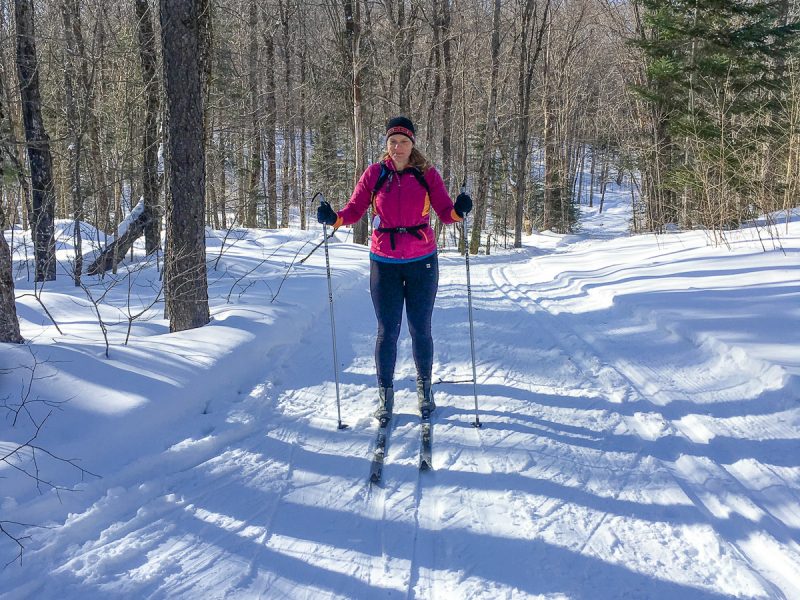 We left our car in the parking lot, and walked 100m to the trailhead, where there were nearly 10k of track-set ski trails and an additional 5k of snowshoe trails. We started out on a trail marked “Easy – Beginner”, but as we got more comfortable, we tried a trail marked “More Difficult – Advanced”. In fact, we ended up doing every single ski trail! We spotted several Great Blue Heron nests along the Rookery trail and enjoyed the view from the Lookout trail. I found the steepest downhills a little nerve-wracking, but I snowplowed my way down them and did just fine. I did fall a few times, but always at slow speed (and mostly because I crossed my skis over one another). The -5C temperature and sunny blue skies made for perfect skiing conditions. We found the trails to be well marked. We didn’t see or hear anyone else on the trails while we were skiing – lucky for us, we were out there on a Monday!

On our second day, we skied right from Mew Lake, where we were staying in a yurt. If you’re not camping overnight at Algonquin, you’ll need to pay for a day pass to use the park. We headed to the Track and Tower trail, which I have previously hiked. The snow was packed down by hikers and snowshoers, but with its frequent small dips and tight turns, this trail isn’t really a great option for cross-country skiing. However, we enjoyed the peace and quiet of the forest. We backtracked to the Highland Trail, skiing past a pretty waterfall and then eventually joining up with the Old Railway Trail. This trail was track-set, and is very slightly downhill heading toward Lake of Two Rivers, so it made for easier skiing. We took the turn-off back to Mew Lake, skiing through the old Mew Lake airfield. It wasn’t track-set, but I understand from a friend that sometimes it is. Later that night, after lots of fresh snow had fallen, I skied right from the yurt door through the Mew Lake campground, first in the fading light and then by headlamp.

On our third and final day, we headed for the Fen Lake Ski Trails at the West Gate, but not before we waited for the 25 cm of fresh snow to be cleared from the campground roads by the plow! Normally the trails are groomed and track-set at Fen Lake, but after the big storm the day before, the trails had yet to be re-done. So, we set out to blaze our own trail in light, fluffy, deep snow! Even skiing downhill required effort! It was very pretty in the mostly hardwood forest, where we had 18k of trails to explore. We didn’t have time to do all that, but we will definitely return. The trails were well marked, with distance markers, steep hill warnings, and full trail maps at trail intersections.

Sadly, it was time to return our ski gear to Algonquin Outfitters, and to head home. We were both impressed with how comfortable the ski boots felt. They kept our feet warm too. The skis and poles were great. Next time, I hope to ski the Leaf Lake Trails, just 2km West of the East Gate. There are 45 km of trails to explore.

We are already planning our next ski trip to Algonquin! 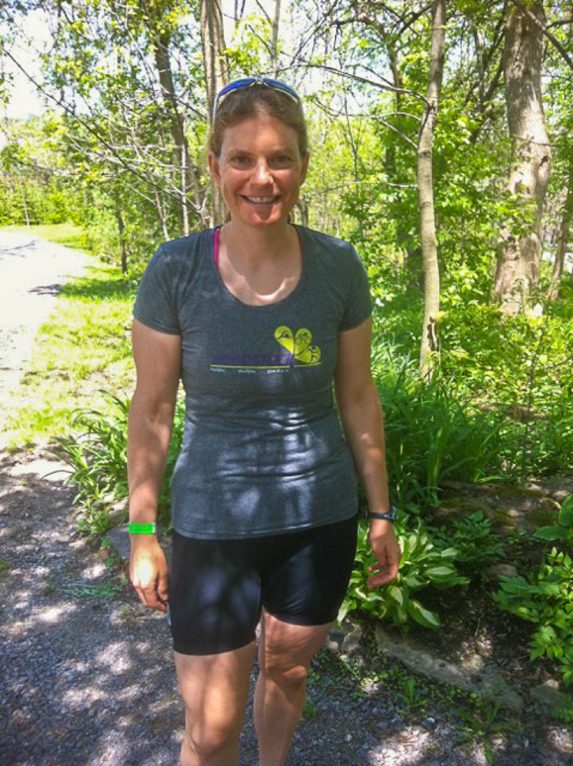 Kyra of Waterdown, Ontario spends her free time swimming, biking, running, competing in triathlons and running races, orienteering and adventure racing, planning her next backcountry adventure and hanging out with her family.