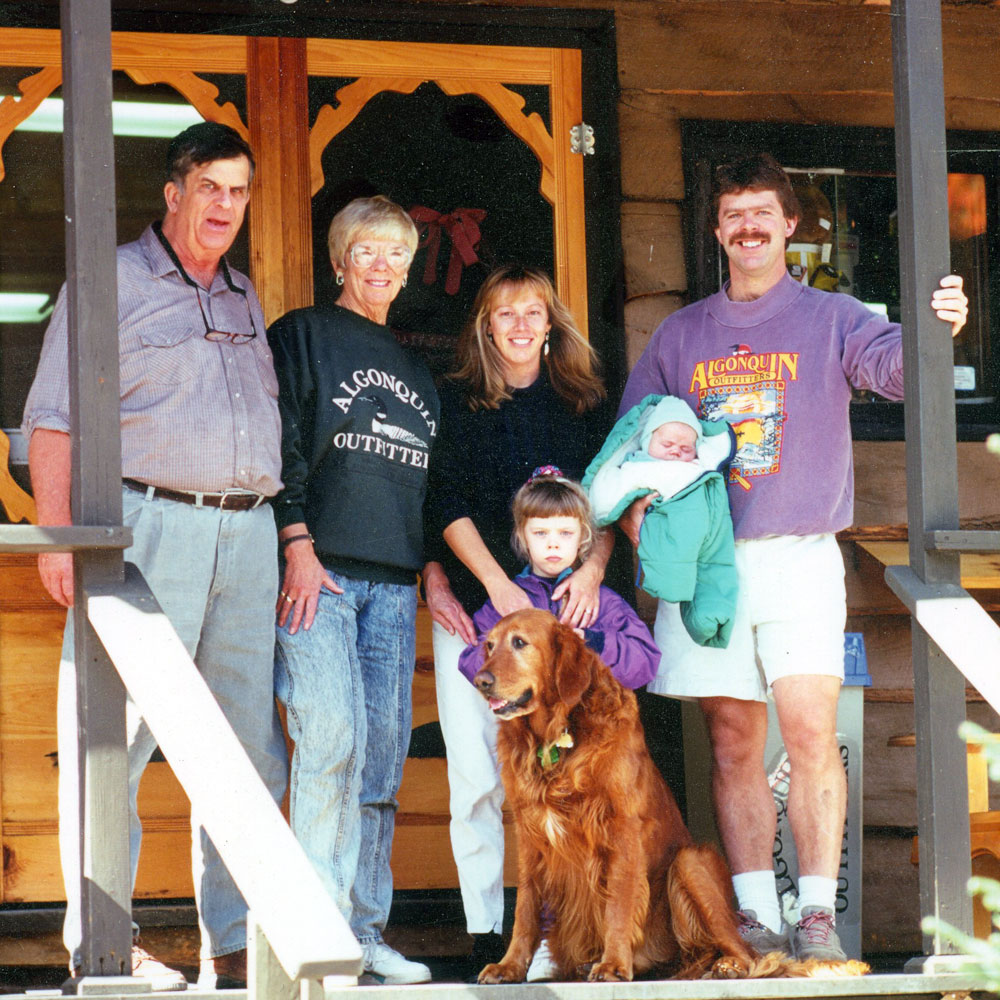 November 1999 marked the passing of the patriarch and founder of the business, Bill Swift Sr. Known to family, friends and customers as Swifty, Meanest or Mean Dude, this colourful character had been an Algonquin Park legend for many years. He died of a heart attack on Nov. 17, shortly after undergoing knee replacement surgery in his hometown of Rochester, New York. He was 71 years old.

Swifty’s relationship with Algonquin Park went back to the late 1930s when he first became a camper at Camp Pathfinder, a wilderness canoe tripping camp for boys that has been operating since 1914 on Source Lake. The camp experience had a profound effect on Swifty’s life. He attended Camp Pathfinder for many seasons, eventually joined the staff and then became owner for a period in the ’60s and early ’70s. Swifty was also a guide at the Highland Inn, located on Cache Lake until it was torn down in the late ’50s. So strong was his personal connection with the park that when Swifty and Wendy got married, they spent their honeymoon on a canoe trip in Algonquin Park. During their 46 years together, until his death, they enjoyed as much time in or near the park as possible.

While working as an engineer at Eastman Kodak in Rochester, Swifty’s passion for canoe tripping got the better of him, so he left that company and founded Algonquin Outfitters in 1961 with Dave Wainman. The outfitting business was quite different back then, though – on a nice day, the staff sometimes decided to close the store and go fishing!

Besides keeping an eye on Algonquin Outfitters, Swifty was very active behind the canoeing and tourism scenes in Ontario. He was a long-time board member of the Northern Ontario Tourist Outfitters Association (NOTO) and a founding board member of both the Canadian Recreational Canoeing Association and the Algonquin Wildlands League. In 1997, Swifty was awarded the prestigious Director’s Award by The Friends of Algonquin Park, in recognition of his service and contributions to the park. Over the years, one of Swifty’s pet projects was the restoration of the historic Brent Ranger Cabin. Visitors to this beautiful cabin today enjoy the benefits of Swifty’s contributions.

Swifty and Wendy also loved to travel to other interesting places. Every year, staff and customers would look forward to hearing tales of their adventures in far-flung places. Whether it was rafting on the Omo River in Ethiopia, canoeing among hippos on the Zambezi River, dancing in a mock war dance in Irian Jaya or hanging out with country music legend Jerry Jeff Walker at his annual birthday party in Lukenbach, Texas, Swifty would never let bad knees or advancing years stand in the way of enjoying himself!

Once the news of Swifty’s passing got out, many customers called, wrote and emailed to share their special memories of him. One of the most heartfelt messages was sent by Duncan Ross, a tourism consultant who spent many years working for Ontario Tourism, promoting canoeing and camping in Ontario. Duncan wrote “…he was a great man. He had a very profound impact on my life. He demonstrated the quality of perseverance and standing up for what he believed in. He spent countless hours sitting on advisory committees and providing input that would benefit future generations of outdoor enthusiasts. He built a business that has brought joy and adventure to hundreds and thousands of people. He was a global ambassador of epic proportions and he was so passionate about his love of his family, the Park and canoeing.”

Just about anyone who ever walked in the door of Algonquin Outfitters when Swifty was alive will have a memory of him. It might be hearing his trademark laugh, wondering at his phenomenal memory (he could remember many customers’ zip codes and would recite them when they walked in the door), looking forward to seeing his big hat at a sports show, being the recipient of good-natured ribbing, withering under his glare for some misdeed or even just wondering who was that fellow barking over the telephone.

Swifty’s influence and memory will live on at Algonquin Outfitters. After his demise, Wendy continued to be active in the business for many years. His oldest son, Richard, and wife Susan have taken over the day-to-day operations. The entire Swift clan went on a memorial canoe trip in the fall of 2000, with the final destination being Lake Lavielle, Swifty’s favourite lake in the park. His canoe tripping legacy also lives on in the form of a challenging route called “The Meanest Link,” which connects the four original Algonquin Outfitters locations. 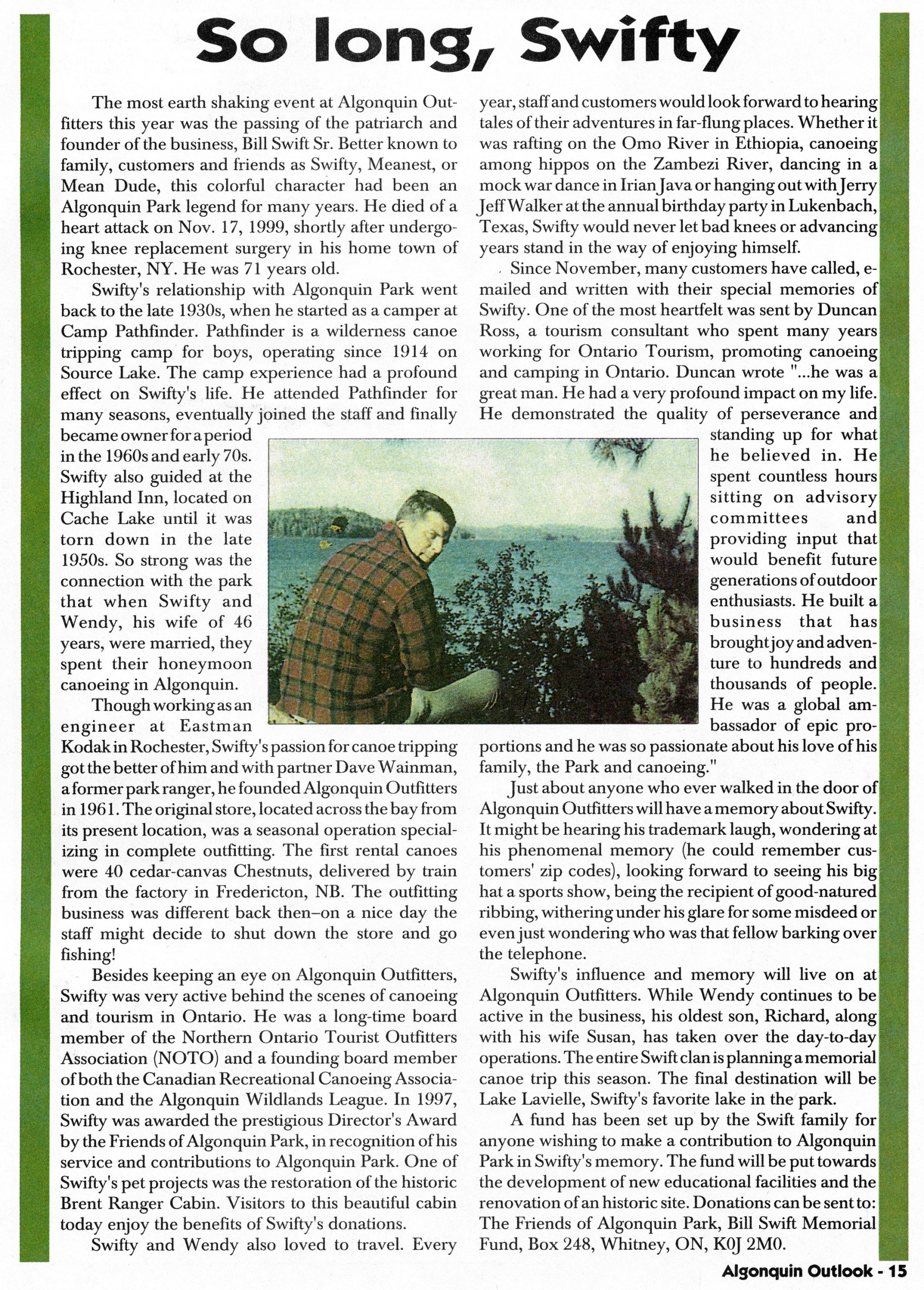