Working from a bench on the edge of the Muskoka River

HUNTSVILLE – It’s all about giving back to the community. 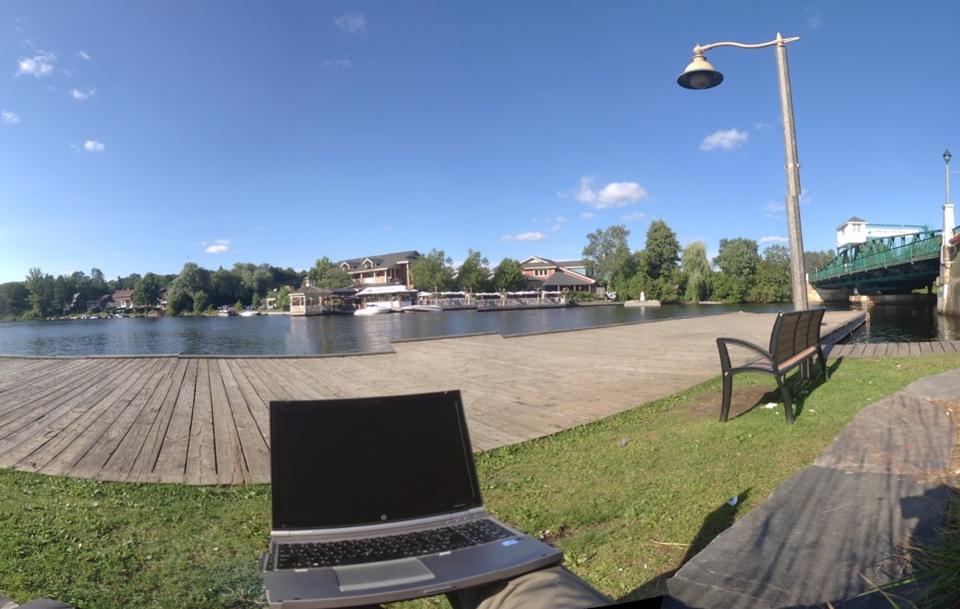 Randy Mitson is the head of marketing for Algonquin Outfitters in Huntsville, and for the last nine years the store has encouraged customers to donate their gently used coats. This year was no exception, and Mitson estimates they get about 100 coats a year. The coats are then donated to the Table Soup Kitchen Foundation and from there they find a new home with someone in need.

“A lot of our customers have jackets that hang in their closet that they might not have worn in years,” said Mitson.

Mitson believes local businesses should put a focus on supporting the community.

“We couldn’t employ the number of people that we do and stay open 12 months of the season without the local community.”

Originally from Simcoe in southwestern Ontario, Mitson and his wife Lynn decided to move up to Muskoka after the photography business they both worked for shut down. He worked as a canoe trip guide for several years, while also doing seasonal work at Algonquin Outfitters. He eventually worked his way up the ladder at the store to where he is today in marketing. 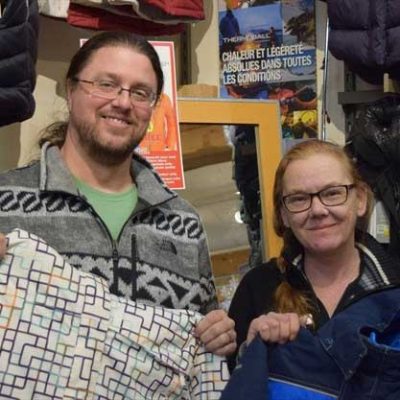 He said his job could be described as a dream job, pointing to the view outside his office window.

“Some days I bring in my laptop and work from a bench on the edge of the Muskoka River. How amazing is that?”

Mitson was involved in the Scouts when he was younger, and he attributes the time spent in that organization with making him who he is today. Community involvement, outdoors training, and giving back were all things he was taught as a child that are still very important to him.

An avid outdoorsman, Mitson estimates he’s spent around 450 days of his life inside the boundaries of Algonquin Park. He spoke at length about all the intricacies many people might not know about the park: the history, the different areas and what you can do there, and other prominent features to be found inside the borders.

“If you talk to 100 people who’ve been to Algonquin Park, you’ll get at least 60 different reasons for why they’re there,” he said. “It’s got something for everybody.”

Mitson typically spends his vacation time in Algonquin, and part of the reason he prefers to stay local rather than go somewhere farther away is because of the carbon footprint. He said the last time he was on a plane he bought trees to offset the damage it would do to the environment.

Just like his vacations, Mitson says it’s important the coats collected here stay within the community and help out local people. Over the years they’ve held the coat drive, he’s noticed more people simply dropping off coats without taking advantage of the discount coupon they get.

It’s all part of the community mindset that’s so important to Mitson.

“I think it’s really important that businesses give back to the community, and I think we don’t see enough of them do it. I’d love to challenge all the other businesses in Muskoka to think about where they are and not just think about tourism dollars that come every year. To think about all the people that live here, that support us in the slow times when the tourists aren’t here.”

Even though the coat drive at Algonquin Outfitters only runs through the month of November, Mitson still encourages folks to donate their gently used winter coats directly to the Table Soup Kitchen Foundation.