Vlog Ep.47 – Big Algonquin Canoe Trip – Day 1 – Lake Opeongo + New Announcement!   This video is about our canoe camping trip in Algonquin Park’s interior, starting from Lake Opeongo, plus a cool new announcement about a brand new 360° VR (virtual reality) camera we brought along with us, to bring you a more immersive experience to enjoy! We filmed select, interesting moments throughout the trip each day with the brand new 2017 Samsung Gear 360° 4K camera! Each day’s 360° video clips will be in the vlog’s description (linked here below), and after the trip we’ll post an unabridged version of all the 360° clips for those who would like to enjoy a longer VR experience in the park 🙂

There are several different ways to enjoy the 360° VR video linked below:

Today’s 360° video clips are moments from our paddle across the calm, wide open North Arm of Lake Opeongo, as well as the beautiful sunset from our island campsite! Though before you check it out, please don’t forget to like, share or comment on today’s vlog and let us know what you thing! Thanks! It really helps us to create more content like this 🙂

This is a 360° VR video from our new Algonquin Park canoe camping vlog series! You’ll get to enjoy some paddling on Lake Opeongo and the beautiful sunset from our island campsite!

Each day’s 360° video will be linked from the main video blog’s description, and after the trip we’ll post an unabridged version of all the 360° clips for those who would like to enjoy a longer VR experience in the park 🙂

Canoe provided by the friendly folks at Algonquin Outfitters – thank you so much! Check them out at www.algonquinoutfitters.com

P.S. Thanks for watching! 🙂 xx 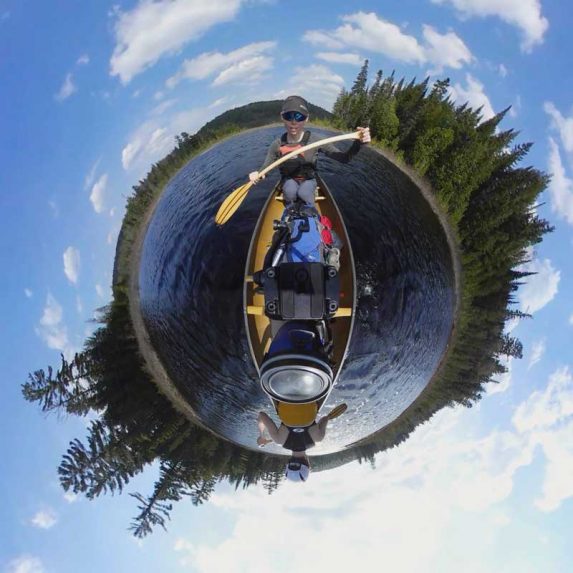 Passionate about cinematography, video editing, graphic design and media production services. I'd write a more elaborate bio, but I'm having too much fun creating a video right now. For realzies ;) ...but in all seriousness, I love what I do and I think it's important to have a good sense of humour in life!