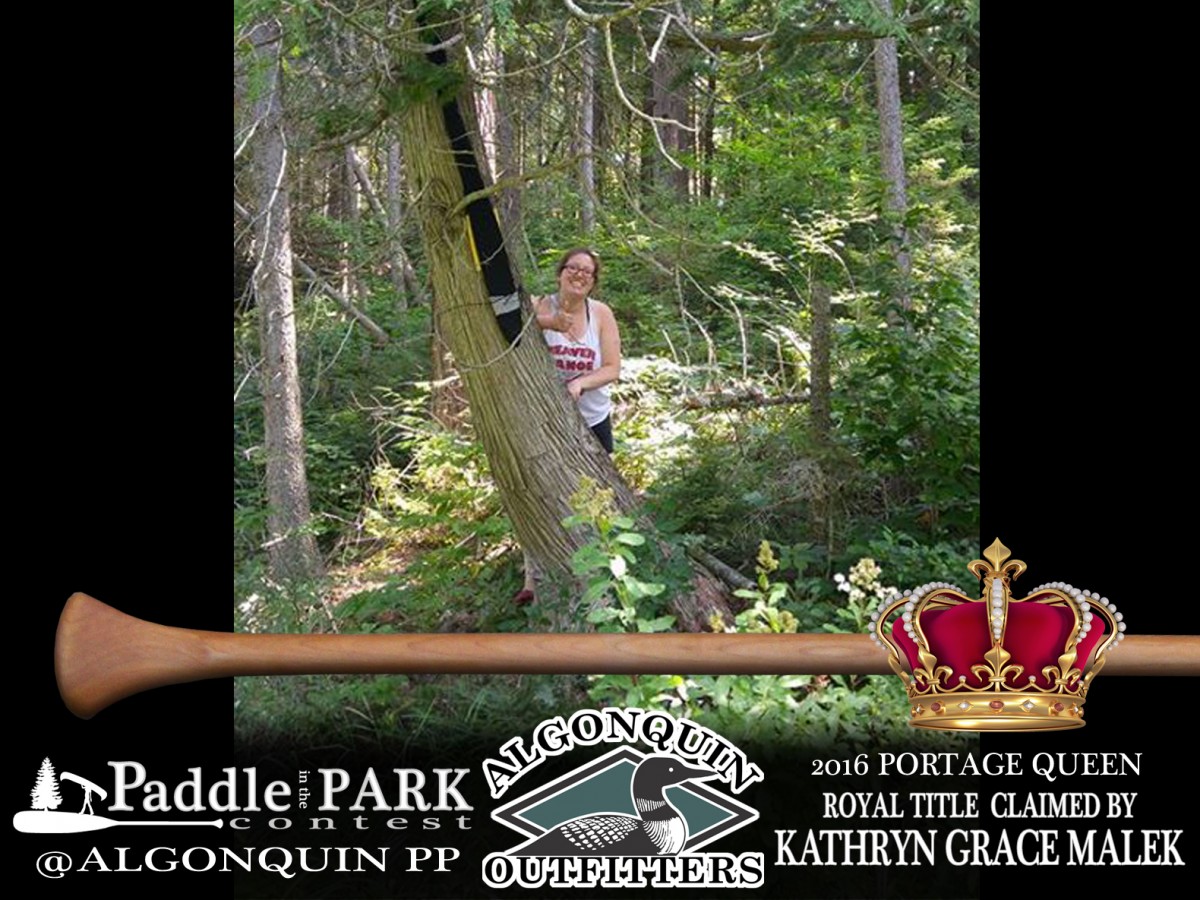 We wondered if the last clue we published for the Algonquin Outfitters PORTAGE QUEEN Paddle would be the final one, and it was! Paddles up to and royal congratulations to Kathryn Grace Malek (Gracie), who has officially been crowned the 2016 AO PORTAGE QUEEN! Gracie found the AO paddle after figuring out all the clues which finally led to her claiming her very special wooden sceptre. We first found out about Gracie’s regal find via Facebook through an alternate source, who turned out to be one of her most loyal servants. We also found out, thru the postings on our Facebook page, that the day Gracie officially found & claimed her very own first PITPC paddle, was also her birthday. Her 25th, no less! A true “Silver Jubilee” year and a most fitting royal PITPC birthday celebration! Her Majesty has prepared an official statement for us, which you can read below, plus see all the gear and prizes that Queen Gracie has won for her kingdom… All hail the PORTAGE QUEEN! 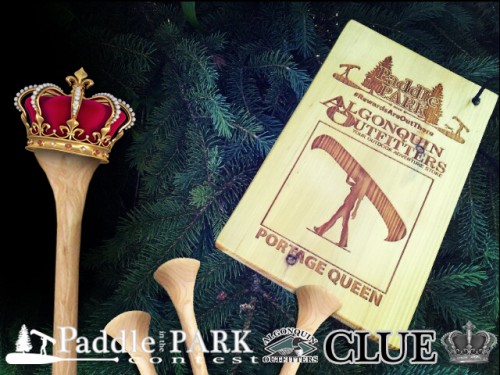 Paddle in the Park:

The Official Royal Statement From The 2016 AO PORTAGE QUEEN

The Paddle in the Park Contest is a big deal in our household. Every year Andrew and I start checking the website early and waiting for the clues to start being posted. This year I even started a PITPC notebook, to keep track of clues and ideas (from the practical to the far fetched).

I also spent an afternoon listing all Provincial Parks that are located within the map boundaries.We were very excited when the first Algonquin Outfitter’s Portage Queen clue was posted. I began our list of possible lakes, and we brainstormed every Queen we could think of (getting quite creative). I scoured all of the Algonquin Jeff’s Maps (goodness knows there are no shortage of those in our house!), examining every lake name for a royal connection. Eventually we narrowed it down to Jubilee Lake or Victoria Lake (just outside of the Algonquin Park boundary). 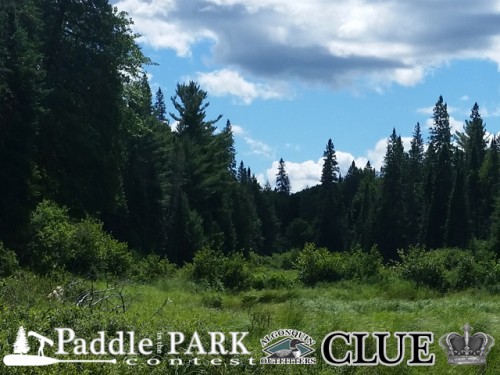 With a game plan, we set out the next week with our friend Tyler to the Rain Lake access. We were on the water by 7am and feeling very optimistic. I was feeling very regal, as I got to sit in the middle of the canoe.

All the way we discussed the clues, the portages and how unlikely it may be to find it so early on. We did the Rain Lake to Sawyer Lake portage fairly quickly as we doubted the paddle would be on it. After a quick paddle across Sawyer (compared to the lengthy paddle on Rain Lake) we walked the portage slowly without our gear, using our tried and true method of each taking a side (this is even more effective when you have three people!) Then we went back, grabbed our gear and walked it again. The whole time repeating the clue to each other, even as far as discussing the type of tree pictured in the clue. We all seemed to linger at the end of that portage, slowly scanning the bush in hopes of seeing that tell-tale white rope. Then we set off across Jubilee Lake to the Jubilee to Juan portage. Once there we walked it without our gear and then headed back; all feeling a little bit defeated. In total we walked the Sawyer to Jubilee Portage four times that day!

Once home we continued formulating plans of where we would find the AO Portage Queen paddle. With each clue that was released it we tried to come up with a new plan, but the portages surrounding Jubilee Lake still seemed to fit. After the second clue came out, Cory Seaman mentioned to Andrew that Last was capitalized and that in the first year of PITPC Mike Last had found a paddle on Rain Lake and that it must be somewhere on the route that past paddle-finder Mike Last had taken. So we studied the route that Mike Last had taken and after much consideration we felt reassured that it had to be on Jubilee Lake. The clue also stated “It’s not far from the second, if you begin at the beginning.” which lead me to Access Point #2 Tim River, which is not far from the Rain Lake access. Now we were beginning to doubt ourselves, as three of us had walked those portages and found nothing, but the clues still seemed to be pointing us there.

August is a busy month for us; Andrew’s birthday is the 6th and mine is the 11th. So we planned to go camping on the 10th as a little celebration for both of our birthdays. We had a wonderful day in Temagami with our two dogs, spending the day reading, swimming and relaxing at our campsite. Early Thursday morning (my 25th birthday) we woke up and decided to start our day early by heading into Temagami to get more ice for our cooler. Once we were within cell service we saw that the third clue had been posted and the Happy Camper Paddle had been found! As soon as we had read “But whether this celebratory find is remembered as golden, silver or ruby,” we knew it had to be on Jubilee Lake. So we decided to continue driving (not having to go back to our campsite due to Andrew’s extreme campsite cleanliness) and head straight for Rain Lake once again! As mentioned earlier Andrew insists we keep our campsite emaculate (a place for everything and everything in its place) which meant that our food had been packed in the car the night before and all of our other gear was in place so we didn’t have to go back. After dropping our dogs off at home (we discovered on the drive it was going to be a bit warm that day!) and grabbing two very large coffees and a bite to eat; we were off once more. 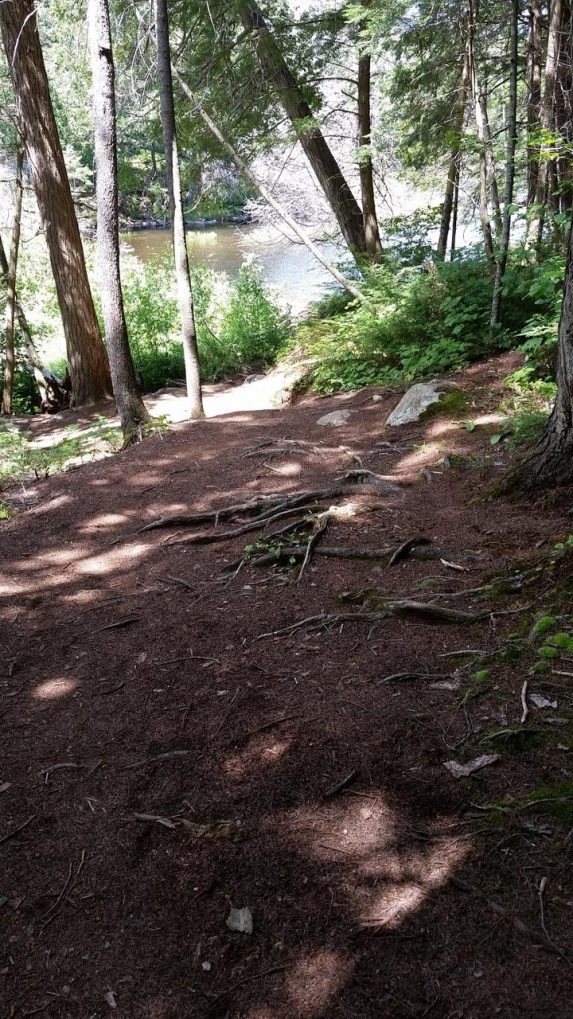 Sawyer to Jubilee Lake portage, where the AO PORTAGE QUEEN Paddle was hidden and found by Gracie and her royal servant, Andrew. Photo by paddle hiders, Fiona & Mike of Badger Paddles.

Once on Rain Lake we were pumped, yet suspicious of everyone we saw. Could they be looking for the paddle too? What if we were too late!? At the Rain to Sawyer portage we saw a couple exploring the bog beside the portage and we wondered if they were looking for the paddle. We quickly walked the portage, I was scanning from side to side, just in case we were off (we didn’t want to walk past it . . . again!) Sawyer Lake was a dream to paddle compared to Rain Lake and we were quickly at the Sawyer to Jubilee portage. Andrew was adamant that it would be on this one; I was not so sure and thought it was on the Jubilee to Juan portage. So after some debate we walked the portage with our gear; so that if if wasn’t on this one we didn’t have to go back for our gear. 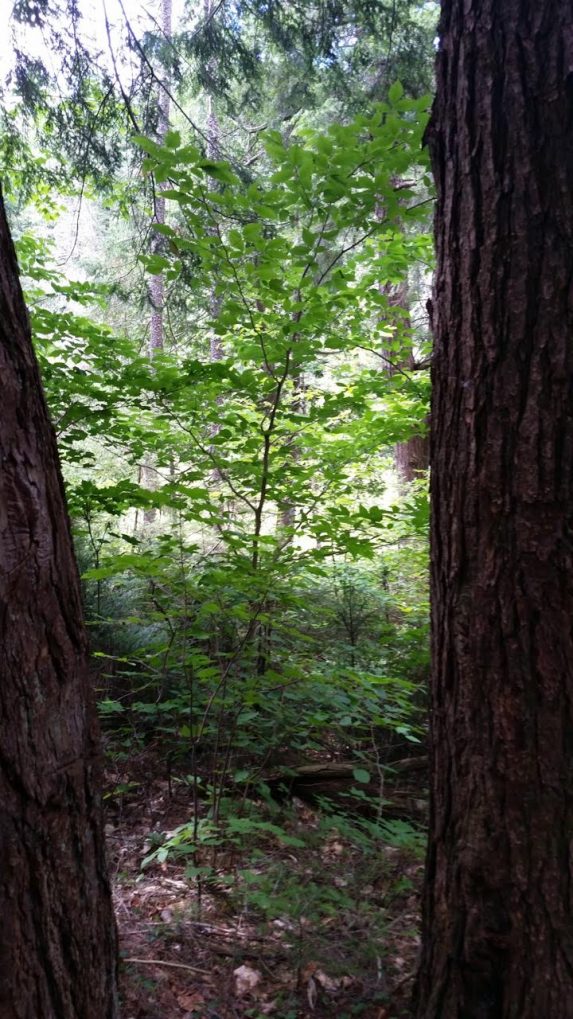 Photo taken by paddle makers and hiders, Fiona and Mike, just after hiding the AO PORTAGE QUEEN Paddle just after the deed was done. Can you see the black ropes thru the trees? 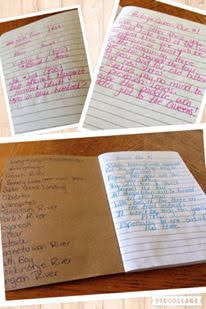 As we approached the end of the portage; quoting clues and theories along the way, Andrew saw the dip in the portage and set the canoe down, he knew it had to be here! I quickly put the rest of our gear down and headed off after him. We knew there was a dip and two hemlocks (which we had identified in the first clue’s picture as well). We were at the same spot we had been weeks earlier, but this time we knew it had to be here. Andrew quickly spotted the black rope, not the white rope we had been picturing and anticipating; and he was off through the bush. I followed to find in all its glory, the AO Portage Queen paddle hung high on a tree facing the bog! We had done it, finally! After a lot of cheering, picture taking and just enjoying the moment; we began our trek home. A long paddle and drive in which one of us insisted on being addressed as M’Lady!

Thank you Paddle in the Park for organizing such a wonderful event each year. Not only does it get us Out There, but it provides fun (and some frustration) while we are at home attempting to figure out the clues (like a real life Nancy Drew)!

Editors note: Spontaneously leaving the beautiful wilds of Temagami and dropping your dogs off at home, all because of a PITPC Facebook post, may be a sign of PITPC fever. Be careful, “Out There” folks, because it seems to be spreading! ? Thanks and paddles up (again!) to Her Royal Majesty, Gracie, for her most wonderful story (and for being our Yyvette Nicole Brown – with her fan notebook – if we were to have a show called Talking PITPC, that is!).

There are still two paddles hidden as of the date of publication of this posted update. The Portageur.ca Paddle and the Nova Craft Canoe Paddle. Who will be the next to claim the bragging rights to the exciting adventure of finding a paddle from the Paddle In The Park Contest? Will it be you?! It could be… See the clues, seek the rewards, and spend more time in nature! 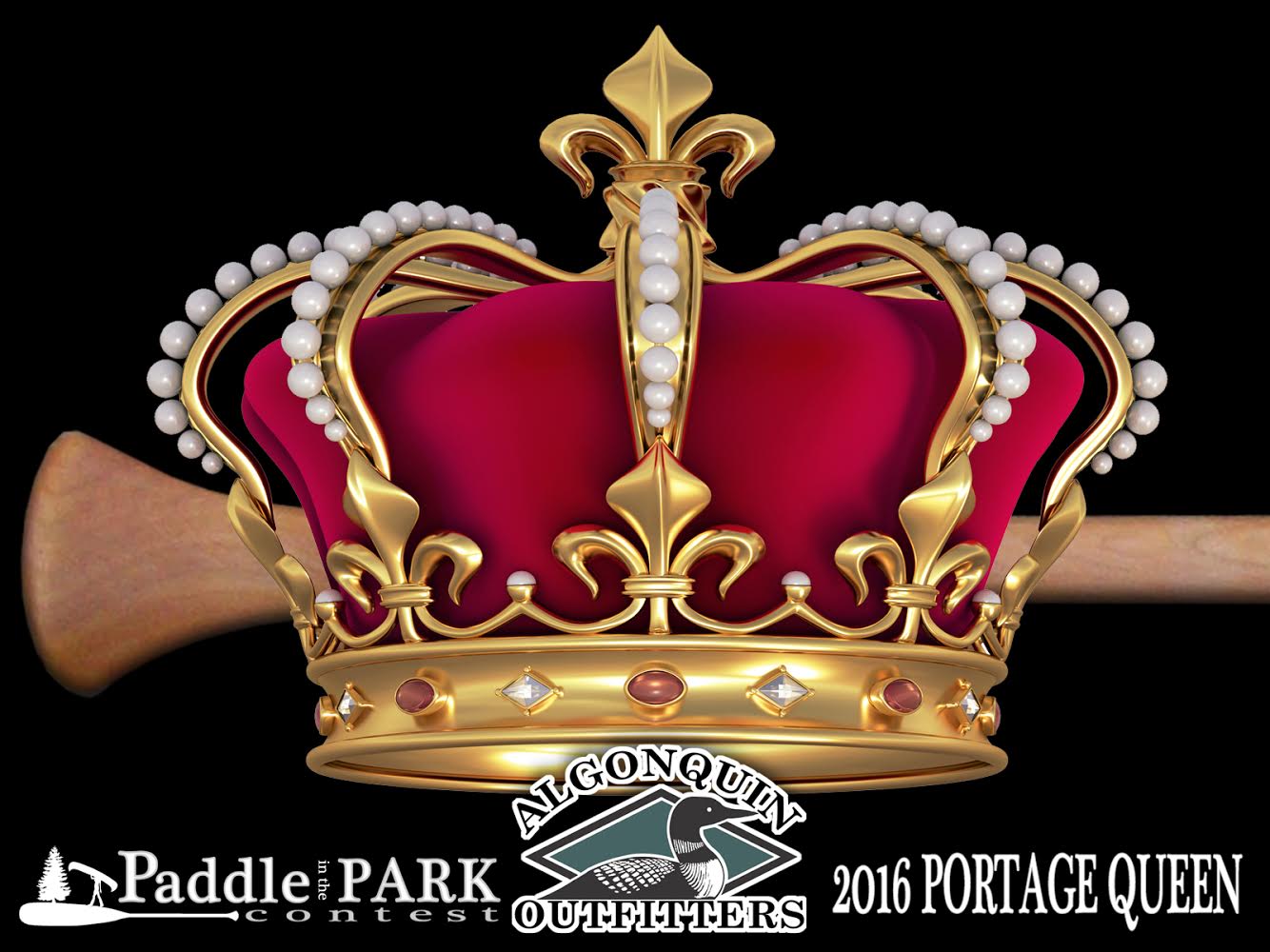 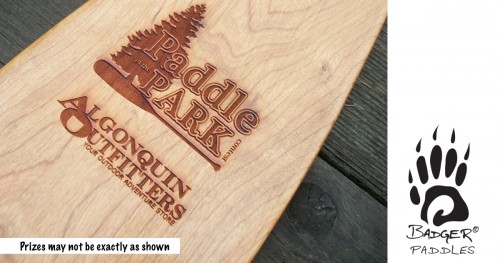 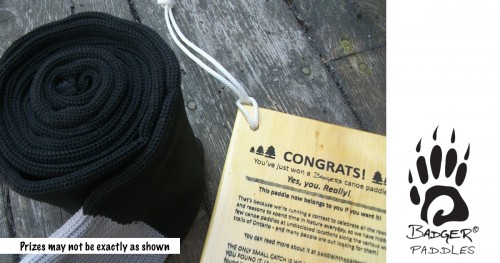 Once you lay official claim to the paddle, you will also be awarded the following gear and prizes from our generous sponsors (minus the paddle already found and claimed!):

Photo of the actual Algonquin Outfitters Portage Queen paddle before being hidden: 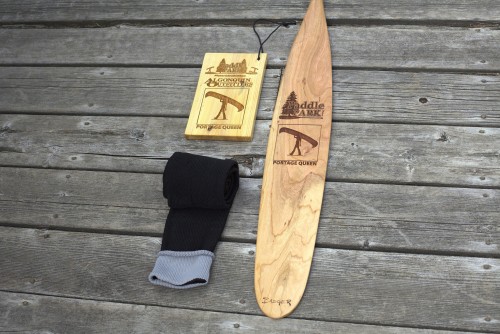