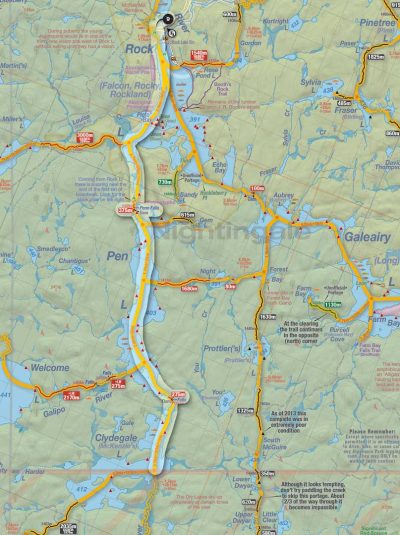 Although it was a late start this year, I was super thrilled to be in the backcountry of Algonquin Park last weekend! I made this trip into an extended weekend (Thursday – Sunday). The trip was planned to start at Rock Lake; we complete a 375-metre portage to Pen for one night, paddle to Clydegale, portage 275 metres  for night two, and then back to Pen for night three before making our way out to Rock.

In preparation for this trip, I purchased my first Swift solo pack canoe!! I spent lots of time test paddling various canoes last fall at the Oxtongue Lake store. I chose the Cruiser 14.8′ because of its light weight and nimble maneuvering ability on the lakes.

Amelia rented a Swift Keewaydin 15′ from Algonquin Outfitters at Oxtongue Lake. Both of us had kayak paddles which, I have to tell you, makes solo canoeing much easier.

Day 1 – We started at Rock Lake. As we paddled our way across the open expanse, we recognized quite quickly that the wind was not going to be our friend. As we were getting into the opening of the lake, a giant blue heron greeted us on the shore. It was literally not six feet away from Amelia as she paddled. We were too busy being in awe of how close it was to think about taking pictures. We zoomed past the pictographs on the right side of the lake, making our way to the other side of the lake while battling the wind.  We tried to stay on the right side the entire time, hoping for a reprieve along the shore as the weather figured out what it wanted to do.

After about an hour of paddling, we made it to the portage at the end of Rock Lake, going to Pen Lake. This was the first-ever solo carry I have completed. Amelia and I decided to do this in two trips – the packs first, then the canoes. This is a short portage but it was rocky and mostly uphill to Pen. The barrel was at least 60 lbs.; Amelia, being a rock star, carried this like a champ to Pen and I took the rest of the gear (mine was about 45 lbs.). We dropped off our gear and went back for the canoes. It was hot and buggy. As buggy goes, it wasn’t terrible but the mosquitos were having a field day every time we stopped for more than 30 seconds.  After completing the portage, we rested, had a small lunch and then made our way forward into Pen.

The winds continued to be a problem. We were aiming to get to a site that is across from the Welcome Lake portage, on a point with a cliff that has a small beach to shore up the canoes. We fell 2 km short, since we were tired from the wind battle, and ended up camping in what we decided to call “Buggy Bay.” We were greeted by a grouse that was all puffed up and irate. He disappeared once he realized that we were not going anywhere! I called him the Buggy Bay welcoming committee.

We also had the pleasure of making a friend we named “Chester” the super-friendly chipmunk. He hung out with us for most of the stay – because of the food, I believe! The campsite itself was great; everything was in close proximity. We were slightly disappointed, though, that someone had left a whole bunch of unburned food in the fire pit. 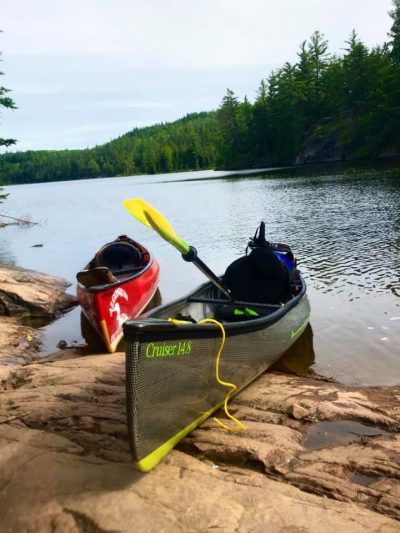 After setting up shelter, getting water and pulling up all our gear, we went looking for firewood. Believe it or not, I didn’t know how to properly saw! I had purchased a lightweight collapsible saw in preparation for this trip but, traditionally, have used a hatchet.

I always thought you have to use brute force to get the wood ready. Amelia saw me struggling and corrected me quite quickly! As a result, I was a sawing champ!!! We not only had enough wood for our evening but left a decent pile behind for whomever decided to camp at “Buggy Bay.”

After an epic meal (tenderloin, potatoes and mushrooms, and a few glasses of wine – yes, we decided to bring a bag of wine with us!), we were ready to relax. I did a little fishing (unfortunately, no catches) and then made a small fire. Tired and content, we both had an early night, but not before what I now call the “Branch Debacle.”

Like any good camper, we all know that we need to hang our barrel in the event that “friendly” furry animals may decide to grace us with their presence. We thought we had successfully found the most stable branch around our campsite. We threw the rope over the branch and started lifting the heavy barrel. All of a sudden, we could hear the branch cracking! We jumped out of the way in anticipation of the fall and narrowly missed this giant tree limb crashing near our heads!

Shocked and relieved that we didn’t get hurt, we both just looked at each other; we knew there weren’t any trees around that we could hoist the barrel on. We made a decision to hide the barrel a few hundred meters from our campsite, in a bush. Definitely not ideal, but it was all we could muster for the evening.

The most notable animal encounter for our first night was an owl that clearly was not happy we were there. Being from southern Ontario, the owls I am used to hearing sound almost like songbirds, gentle in their “whooing.”  The owl we encountered, however, woke us up from mid-sleep.  Both of us thought we were under attack by some unidentified wild animal, screeching almost like a demented angry goat!

The “whooing” was pretty aggressive. I joked the next morning that I thought it was a chupacabra coming for a visit! I wish I would have been able to see this guy; I’m guessing it may have been a barred owl but am not sure.

I woke up early the next morning, enjoying the sunrise in the sandy bay. Day 1 under our belts, it was time to get ready for the next move. 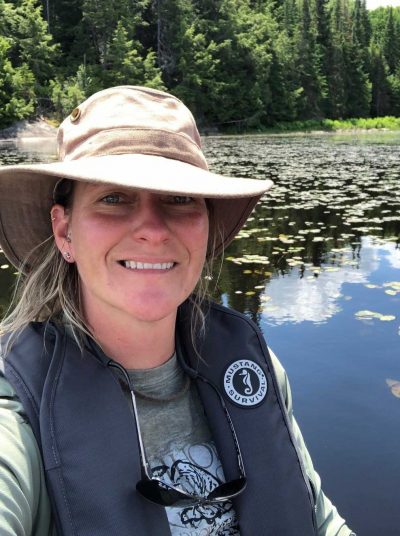 Natalie Zieman is an avid hiker and is an outdoor enthusiast. You can find her spending her time regularly in Algonquin Park as well as many other adventures which include other Provincial/Nationals parks such as Banff and Jasper Parks in AB. She currently working on completing the Bruce trail E2E here in Ontario and of course planning canoe trips regularly in Algonquin Park and other areas.