“What is the best time of year to visit Algonquin Park?” That’s one of the questions most frequently asked by people planning canoe trips. There are two simple answers: 1) it depends, and 2) anytime. The long answer, however, goes into more detail. This page contains an overview of the area’s four annual seasons, thoughts on significant events like ice-out and bug season, plus links to weather forecasts for Algonquin Park.

When Does The Ice Go Out?

Canoe tripping season starts as soon as lakes are free of ice. Typically, large lakes like Opeongo and Cedar are impassable until the end of April. Smaller lakes and rivers may open earlier. A few years ago, our intrepid reporters unearthed a secret document revealing the results of a 33-year study of ice-out dates on Lake Opeongo. Each spring, Opeongo is usually the last lake to open up in Algonquin Park. “Ice-out” refers to the day when boat travel from end to end is unimpeded by ice.

Over 33 years of record-keeping, the average ice-out date was April 30, the earliest was April 12, 1981, and the latest, May 15, 1972. A new ice-out record was set in 2012, when Lake Opeongo became ice-free on March 29. With such a wide range of potential dates, you now know why our staff have such difficulty answering that popular question, “When will the ice go out this year?” The best strategy for trip planning is to have a flexible schedule and route plan, keep your eye on the weather forecast, then phone us closer to your trip dates to get a better prediction.

Canoe trippers planning an “ice-out” trip should be prepared for highly variable weather, wet (possibly washed out) portages, ice-cold water and, for some of the more remote starting points, rough access roads.

We post condition reports, pictures and ice-out stories on our blog page. For an informative and up-to-date report on Canoe Lake conditions, visit the Canoe Lake ice-out page. Algonquin Park staff regularly post seasonal updates on access roads and general ice conditions under “News Bulletins” on the Algonquin Park home page. The Friends of Algonquin Park do a really good job of documenting ice-out conditions on their website and Facebook page. 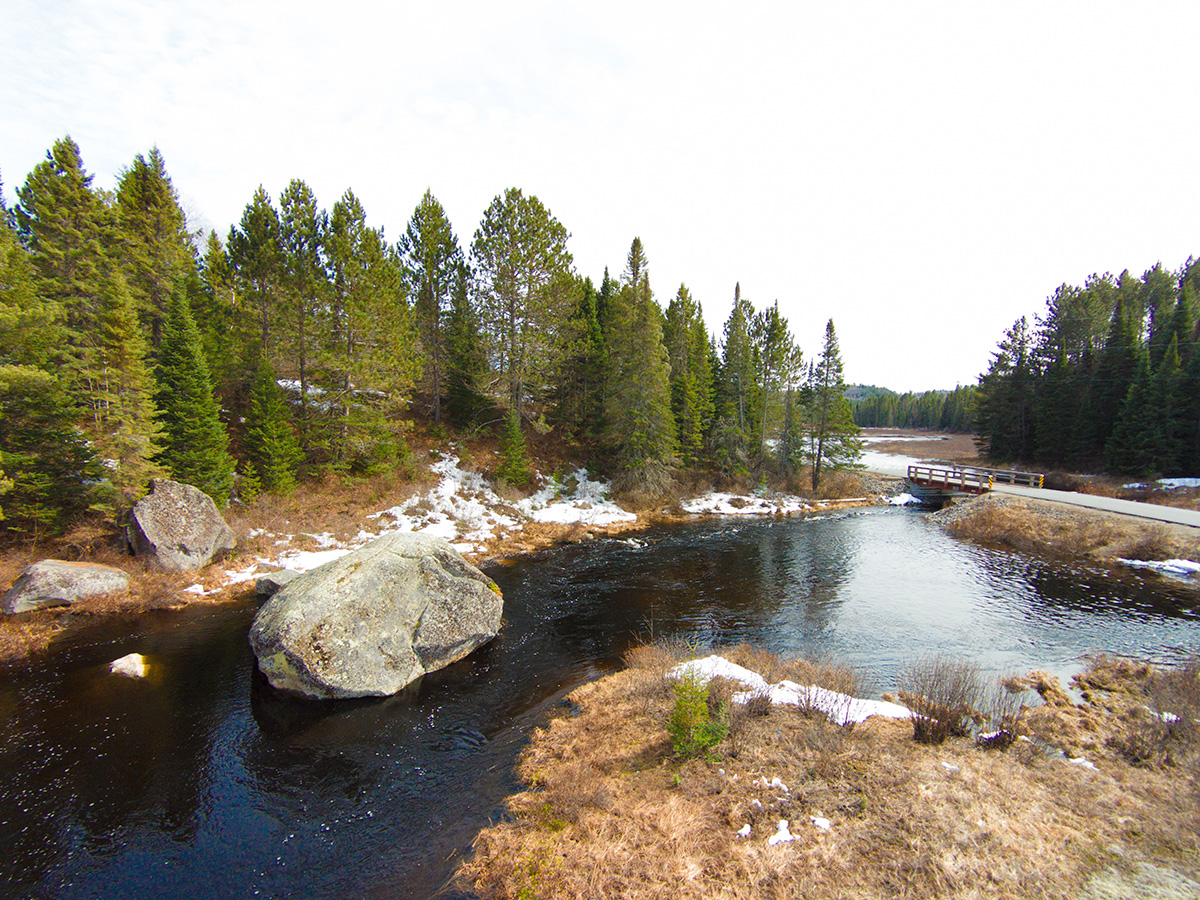 Spring is the season for that first canoe trip of the year, black flies, outstanding trout fishing and peak moose viewing. Once the ice is gone, the first two weeks of May can be a perfect time for a canoe trip. Water levels are high (but still very cold, so be sure to wear your PFD), the park is relatively uncrowded, the weather is generally good, spring is in the air, trout fishing is at its peak and, best of all, the black flies are not out yet. Those pesky little critters do not usually emerge until the third week of May and, when they do, look out! 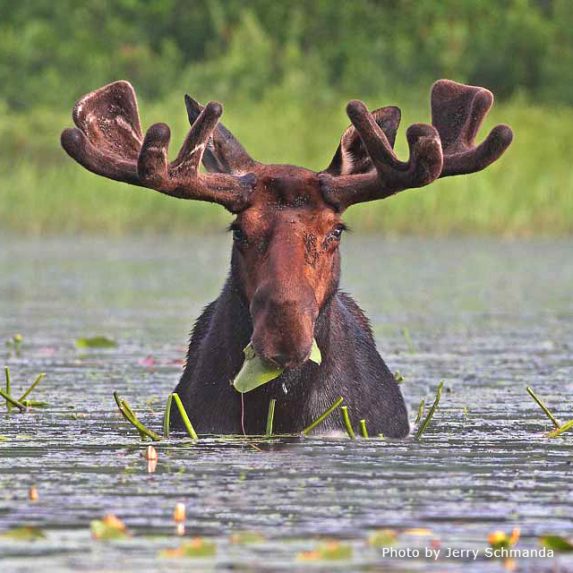 Black flies are a notorious biting insect found in the cold, clean water of northern regions, including Algonquin Park. They generally hatch a couple of weeks after ice-out, helped along by warm spring weather, early spring flowers and dropping water levels. The good news is that they don’t bite for the first few days, even though they are quite annoying. Several days later, they start looking for their blood meals. The best defenses against black flies are physical barriers (like bug hats and bug jackets), potent repellents (despite controversy about toxicity, DEET is still the most effective) and a good sense of humour. If you don’t mind the bugs, late May and early June canoe trips offer warm days, cool nights, reasonable water levels and the chance to have Algonquin Park pretty much to yourself. This is also one of the best times to see moose. With aquatic plants growing and the bugs driving them out of the deep woods, moose tend to favour ponds and stream edges, where they’re easily visible from a canoe. Visitors from the U.S. should note that the third weekend in May is a holiday weekend in Canada. 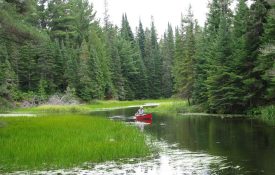 Summer starts with a bang in July, since Canadian and American holiday weekends are back to back in the first week. Black flies are usually gone by mid-June, so the principal insect to deal with is the much more tolerable mosquito, which usually persists until late July. Early July is a good time for smallmouth bass fishing, with the really hot weather not hitting until the middle of the month. (Interestingly, in 1994, we recorded a January low temperature of -40°C and a July high of +41°C – talk about extremes!) The first week of August is probably the busiest one of the season in this area. The first weekend is a holiday for Ontario residents, so many vacations are planned around that time. By this point in the summer, even the mosquitoes have died down, so August is considered a fairly bug-free month. Late-summer weather is very changeable, though; evenings are pleasantly cool and spectacular thunderstorms are not uncommon. Water levels can be low in August, so don’t plan trips on small rivers and creeks (e.g. the Nipissing and Tim rivers). Nightlife is great in August, too! This the best month to watch meteor showers, hear wolves howl and marvel at the northern lights. Camping permit reservations are essential during July and August, particularly on holiday weekends. 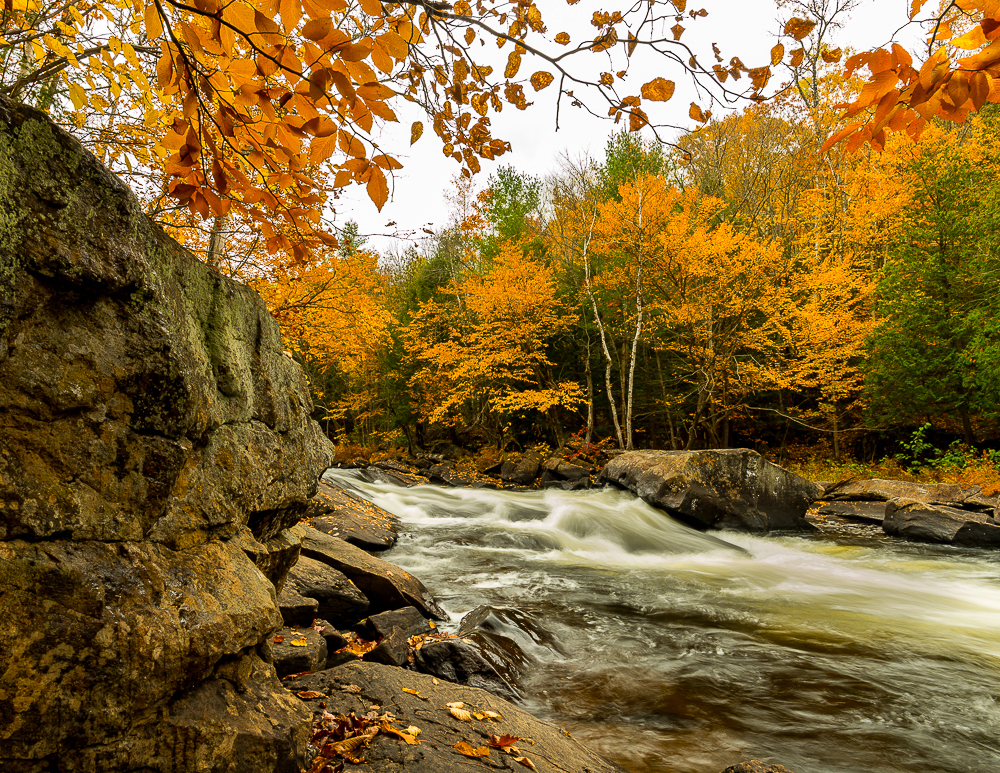 After the Labour Day weekend in early September, the number of park visitors drops dramatically. Anyone with time off in September should be planning an Algonquin Park canoe trip. You’ll find spectacular fall colours (usually peaking around the end of the month), no bugs, higher water levels and, if you’re lucky, glorious weather. Early October can still offer nice canoeing weather but, later in the month, it could snow. Die-hard canoe trippers will go on trips right up until the lakes freeze in November. Canoe tripping anytime after the middle of October is only recommended for experienced, well-equipped groups. Remember that, as fall progresses, the days get shorter and you have to put a considerable amount of effort into simply staying warm. Fall is probably the best time to enjoy Algonquin Park’s fine day hiking and backpacking trails. The weather is ideal for hiking and the fall colours make every step a scenic view.  See the Algonquin Park Fall colour report.

Late in the fall after the maples have shed most of their red, orange and yellow leaves we are treated to the Golden Encore in Algonquin Park when Aspen and Birch trees turn a brilliant golden colour. 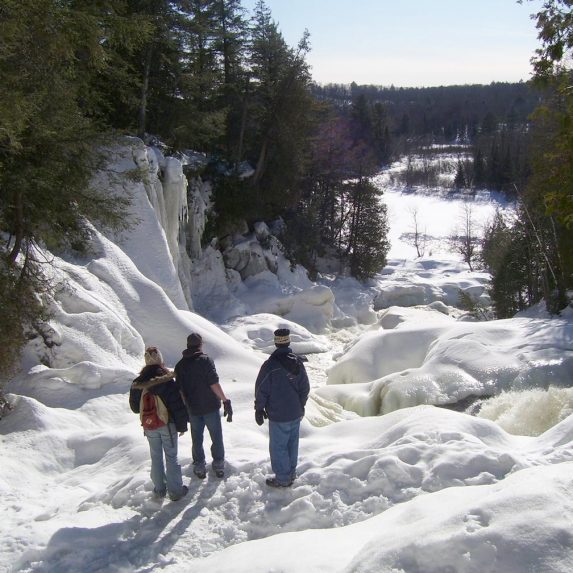 Autumn is Algonquin Park’s most colourful season; once the first bold display of bright leaves has passed, the “golden encore” produced by poplars and tamaracks extends this beautiful time. Then, we move into November’s  “mud season” and, after that, winter arrives quite quickly. Small lakes are usually frozen by early to mid-December and snow is more frequent.

By Christmas, there is usually enough snow to enjoy Algonquin Park’s three excellent cross-country ski trail systems. Covered with a blanket of snow, the park is wide open to those on skis or snowshoes. Winter camping is possible at the Mew Lake campground and in the park interior, but permits are still required. The Algonquin Visitor Centre is open on weekends during the winter. Skiing is usually possible through the middle of March. The “in-between” time in late March and April is a good time to head out on the hiking trails and try to spot signs of spring or think about the upcoming canoe season. Algonquin Outfitters locations in Oxtongue Lake, Huntsville, Haliburton and Bracebridge are open year-round. Our Opeongo and Brent bases are only open seasonally and are not accessible in the winter.

One event that you’ll want to put on your calendar is Algonquin Park’s Winter in the Wild Festival. A family-oriented event held annually on the Family Day long weekend in mid February.

Weather conditions in Algonquin Park are extremely variable and should never be taken for granted. Rapid weather changes can occur and storms develop very quickly. Algonquin is a place of extreme seasonal variations – temperatures can be as high as +40 C (over 100 F) in the summer and as low as -40 C (-40 F) in the winter. Fortunately, both those extremes are only reached occasionally. The park also covers a huge land mass, larger than many small countries. You’d be surprised by how different the weather can be in different areas. Park visitors in any season should be prepared for all possible conditions (but hope for the best). Check our list of  “what to bring on a canoe trip” for suggestions on clothing and other essentials.

Advance knowledge of forecasts and general weather patterns can help you plan a safe and successful trip. Many good forecasts are available online. Here are our favourites.