Why Fish in Algonquin Park?

There are some lakes in Algonquin Park where you can fish from a motorboat, complete with all the electronic accoutrements of modern fishing. Too often, unfortunately, the quality of the fishing in easily accessible areas deteriorates over the years due to a variety of factors, including over-fishing and the weakening of natural fish populations when hatchery fish, non-native fish stocks or invasive species are introduced. Fortunately, there are places, like the interior of Algonquin Park, where the native fishery remains more or less undisturbed and is naturally reproducing. This is why dedicated fishermen will leave their metal-flake bass boats at home and fish from a canoe, deep within Algonquin Park.

Algonquin Provincial Park in Ontario, Canada, is home to one of the world’s highest concentrations of natural brook trout lakes. Despite being a protected area of 7,630 square kilometres (2,946 square miles), though, Algonquin’s native fisheries are under threat. Learn more about brook trout, what research has taught us about this special fishery and the simple things you can do to protect it for future generations at: www.algonquinpark.on.ca

Can I Really Catch Fish From A Canoe?

Where to Purchase a Fishing License?

Ontario fishing licenses are available for purchase at the following locations in Algonquin Park during normal business hours.

Where Are The Big Ones? 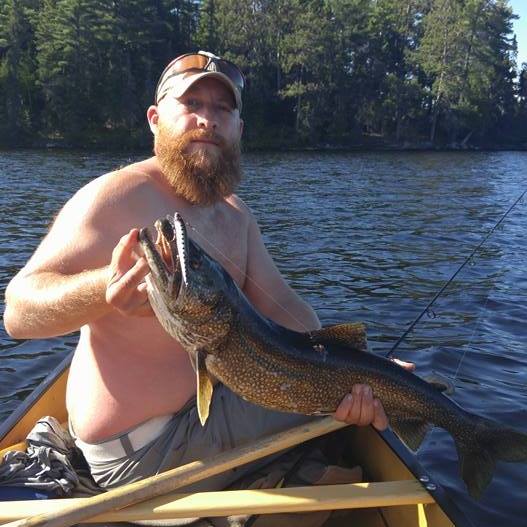 The highest quality of trout fishing in the park is in interior lakes and streams, inaccessible by road, where both flying in and using outboard motors are prohibited. If you want to go to these lakes, you will have to use a canoe, carry your gear over portages and adjust to life without outboards, fish finders, down-riggers and such gear. Although, for those unwilling or unable to travel deep into the interior, most road-access lakes in Algonquin Park offer fantastic smallmouth bass and lake trout fishing.

People often ask: “How’s the fishing up there?” And, we like to answer that Algonquin Park offers excellent fishing for the ambitious. If you ask most experienced Algonquin Park anglers, “Where should I go to catch brook trout in Algonquin Park?” you will probably receive a vague, rambling response that gets you excited but doesn’t leave you with much specific information. They may tell you how great the fishing is but probably won’t tell you exactly where that great fishing took place.

A little secrecy is understandable. People like to protect their “secret stashes,” whether it’s a fishing destination, powder snow run, photography hotspot or private swimming hole. When people work hard to get somewhere or gain precious knowledge and experience through research, trial and error or perseverance – perhaps even getting skunked a few times and hitting the jackpot other times – they are not likely to be inclined to simply give that information away freely. Another good reason to keep certain information to yourself, of course, could simply be resource protection.

The quality of Algonquin Park fishing is enhanced by Ontario’s Ministry of Natural Resources and Forestry (MNRF) regulations. The MNRF closes trout season in the fall and doesn’t reopen it until April, effectively eliminating ice fishing. The use of live bait fish is also prohibited in the park. Several excellent speckled trout lakes have been established where only artificial lures can be used and lower catch limits apply. Results from the 2012 Algonquin Park Trout Fishing Survey indicate that over 60 percent of the fish caught are released.

Studies show that the most important factor affecting fishing success (or lack of it) is the angler’s knowledge. Like any other sport, you must first master the fundamentals before you can expect any great success. Visiting a new area presents a fresh set of fishing conditions to learn about and understand. When well-known television fisherman Babe Winkelman visited Algonquin Outfitters in 1989, our staff members were very impressed by the amount of time he spent experimenting with different methods and figuring out the right techniques for the conditions. Even with his considerable fishing knowledge, Babe spent over two hours surveying the lake before he wet a line for the smallmouth bass segment. For Babe, it paid off. His patience, knowledge and willingness to experiment resulted in some outstanding angling. In one of the two programs resulting from the visit, he stated, “I intend to return to Algonquin Park again and again!”

“Specks” are among the most sought-after game fish in North America. Extremely sensitive to pollution, the range of speckled trout has narrowed considerably in recent years. Algonquin Park is fortunate to have strong naturally reproducing brood stocks of these beautiful fish in its interior lakes. Found in both streams and lakes, these fish are widespread throughout the park. Trout season opens on the fourth Saturday in April and closes on September 30th, with the best fishing generally being in May or June. They can be taken on fly or spinning tackle with lures like small spoons, spinners and flies. Expert fly fishermen enjoy success in streams all season long.

The “laker” is possibly the most widespread fish in Algonquin Park. Many people think the only way to catch them is to troll deep with specialized tackle but, during May and June, lake trout can be caught at or near the surface with spinning or fly equipment. The best method is trolling spoon lures along rocky shorelines or over shoals. As the water warms, lakers typically go deeper and specialized tackle is required; only about 10 percent of a lake is likely to be productive at that time. The season is the same as for brook trout.

The smallmouth was not one of the original piscine inhabitants of Algonquin Park. Introduced at the turn of the century, “smallies” are found in more easily accessible lakes than trout, often those with road access. Bass season opens on the last Saturday in June and continues through November. The smallmouth typically feeds at or near the surface and can be caught on light tackle throughout the season. One of the most exciting methods of fishing for bass, though, is with a fly rod and popping bug.

The largemouth bass is olive-green right after ice-out occurs and, later, is generally grey hued. The sides of the fish are marked with a series of dark, sometimes black, blotches forming a jagged horizontal stripe along each flank. The upper jaw extends beyond the eye socket. In comparison by age, a female bass is larger than a male. The largemouth is the biggest of the black basses, reaching a maximum recorded overall length of 29.5 inches (75 cm) and an unofficial weight of 25 pounds, 1 ounce (11.4 kg). It’s an uncommon catch in Algonquin Park, however, since few lakes have them.

The walleye is also a relatively recent addition to the Algonquin fishery. These fish are found only in the northern part of the park, in lakes near our Brent base on Cedar Lake, and downstream from there in the Petawawa River system that feeds lakes like Radiant. The season opens on the third Saturday in May and continues through November, with the best fishing in late May and early June. Yellowish jigs and lures seem to be the most effective.

The “water wolf” has a relatively limited range range inside Algonquin Park; it’s found in a few lakes that are accessible from access point #17. The northern pike is most often olive green, with shading from yellow to white along the belly. The flank of the fish is marked with short, light bar-like spots. The fins have darker spots and are sometimes reddish. Younger pike have yellow stripes along a green body; later, the stripes divide into light spots and the overall hue shifts to olive green. The lower half of the gill cover lacks scales and there are large sensory pores on the head and underside of the lower jaw, which form part of the lateral line markings on its belly. Northern pike are known to strike fast and be aggressive.

Tackle Tips From Our Fishing Gurus

In the eyes of fish, all anglers are equal. This is certainly true in Algonquin Park, where the reward goes to the person willing to put in the effort and travel to lakes that are better for the type of fish they’re hoping to land. Our Brent and Opeongo bases offer access to some of Algonquin’s finest interior fishing lakes.

Algonquin Park fishing conditions are fairly predictable and simple, so there is no need to bring a monster-sized tackle box with a bunch of bonefish lures. Tackle for canoe-based fishing needs to be simple, versatile, easily portable and reliable. A two-piece, medium-weight spinning rod with a well-matched reel is probably the most useful setup for Algonquin Park fishing. Six or eight-pound line is a good compromise between durability and castability. While best suited for shoreline and river casting, this setup can work for trolling, using three-way swivel rigs and devices like the “Dipsy Diver.” It’s important to consider how you will pack and protect your tackle on a canoe trip. Portaging is particularly hard on any exposed fishing rods! Many park fishermen break down their rods and carry them in rod tubes lashed to the canoe’s thwarts or below the seat. Reels can be carried separately in a waterproof bag or box. 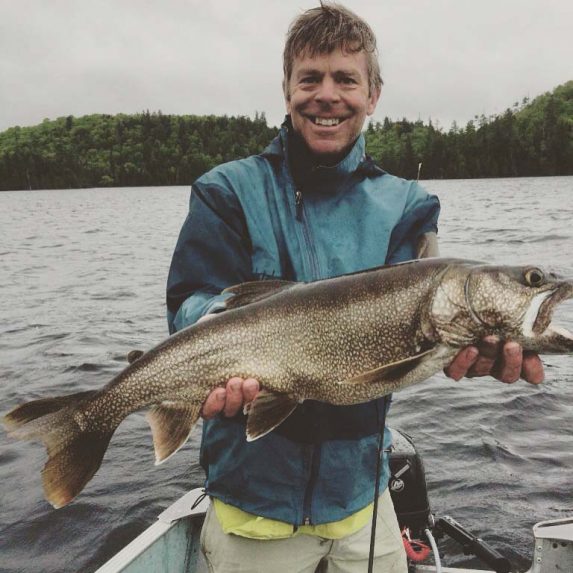 Lure selection is a very personal thing. We recommend a variety of small to medium-sized spinners, sinking and diving minnow-type lures and at least one kind of surface lure. Jigs are very effective for bass. Algonquin smallies seem to like the natural colours and darker shades. For the first three weeks or so of trout season, fly fishing enthusiasts will have good luck using wet flies like midges and nymphs. At that time of year, the most productive for trout fishing, our fishing gurus recommend using attractors, rather than emergers or terrestrials. In general, throughout the season, natural-coloured flies work much better. Our favourite flies are the Blue Winged Olive #18 (early spring), Pale Evening Dun #18 (late spring), Damsel Fly #6 (summer) and the Dark Grey Stonefly #12 (fall). Summer anglers should remember to pack their favourite bass bugs, especially the Soft-Shelled Crayfish.

Three of our locations sell tackle, with the most comprehensive selection at Oxtongue Lake and Opeongo, and a reasonable array at Brent. You’ll find an excellent variety of lures and flies, rods, reels and a host of accessories.

The Friends of Algonquin Park group publishes two inexpensive and useful booklets on fish and fishing, plus a lake depth map book:

• Make sure you have (or know how to get) a valid Ontario fishing license. 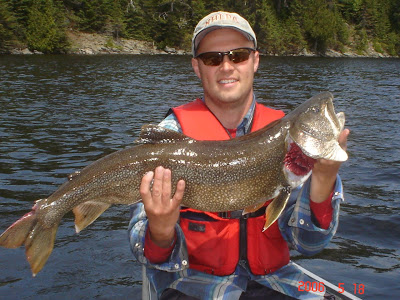 A monster lake trout caught and released from a canoe