Algonquin Park ~Where it all began

Randy at Algonquin Outfitters kindly asked me to write about Muskoka or Algonquin Park. I acquiesced even though most people assign me to that other great canoeing region of Temagami. But…and that’s a very significant ‘nonetheless’ because it was in Algonquin Park where I first plied my canoe over half a century ago. That would have been 1968 when I was 16 and knew everything there was to know about life and about canoeing as many mid-teenage boys do. After several near-death experiences, I suddenly realized that I may have been a little zealous about my survival capabilities. Still, as a youth, passionate about canoeing and with an already well-healed distaste for social norms, I submitted to the Greater Power with careless abandon.

Leaving from North Bay, four teenage boys set their compass for Algonquin Park in two beat-up cedar canvas canoes, a paltry rag-tag camping kit that consisted of one cheap, flyless, bug-screenless, canvas tent, no ground pads and a Spartan amount of foodstuff. We would fish and scrounge, maybe beg along the way. Nothing was water-proofed; our one navigation aid wasn’t much better than a Rand McNally road map. Our route: the Mattawa River, on down the mighty Ottawa, up the Petawawa River. Yes…up the Petawawa and into the famed Algonquin Park. It would take us just over a month to complete.

The historic Mattawa gave me my first taste of moving water (our Kapoc-filled lifejackets remained stuffed under our seats because we were afraid we were going to drown if we actually used them); the Ottawa River with its long reaches and breadth gave the distinction of big water that was to be respected; but the moment we started up the Petawawa things changed. Going upstream was a lot different than paddling with the current and the prevailing winds at your heels. Nobody told us too, that a portion of the river was restricted. After a couple of days hauling our canoes up several rapids we began to hear rifle shots, heavy-sounding vehicles (probably tanks) and a lot of shouting. Of course, everyone now knows that Camp Petawawa Armed Forces base is a no-paddle zone. But to teenage boys, it just ramped up the adventure component a notch and we thrilled to the chase once or twice after being spotted by the military.

Back in the ’60s, the Petawawa River was seldom paddled; portages were almost non-existent or thoroughly brushed over. I remember carrying our canoes and gear across a narrow railroad bridge trestle over the river, running for our lives in case a train would come along. There would have been no place to go except down a hundred feet to the rapids below. And a train did come by, later, as we portaged along the tracks between a rock-cut and we pressed ourselves tightly against the stone wall with only inches to spare. 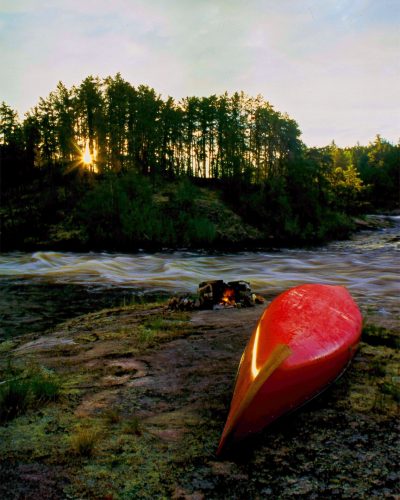 The rapids were big and long and vicious, the shore rocks where we plunged and scraped and hauled were slick and sharp-edged. I watched my friend lose his balance and get swept down the river. There was no panic, just shouts of encouragement and laughter. It was all fun – even the hard bits. The mosquitoes were atrocious, relentless and the home-remedy of 3-parts stove oil to 2-parts citronella oil had little effect on them, nor being half-perched over a smoky fire. The ground was damp and hard and when it rained we got wet either sleeping under the canoe or in the tent, didn’t matter, all the while being eaten by the scourge of bugs.

But here’s the thing. For two weeks we worked our way upriver and saw not one other person. It was as wild a place for boys as any wilderness on the planet. Everything around us swelled with magnificence and beauty and vibrancy. We were in awe; quite possibly starving as well. Once in the park, we chanced upon a government trail crew who took pity on us and gifted our bedraggled crew with a full case of canned beans and other assorted goodies. It was either feast or famine – a mantra we carried as part of a self-inflicted ‘coming-of-age’ thing.

Windbound and out of food at the east end of Cedar Lake, watching the waves crash against the shore for two days, then a late evening break and a hard paddle to the beach just shy of the Brent Store where we would reprovision. We spread our sleeping bags out over the sand at midnight. An early morning visit by a black bear, walking over our beds, growling (or maybe it was my stomach…), he managed to pull everything out of our food pack but was frustrated to find nothing to eat.

The Brent store: it was our salvation; like something out of a Louis L’Amour cheesy western novel, a gathering place in the backcountry, but instead of horses tied to a hitching rail, canoes were pulled up along the beach, the sound of a passenger train in the background, campers happy to eat a chocolate bar or eat peaches out of a tin can. Twenty dollars, a fortune back then, spent on groceries that would last us another week or so, a fistful of Eatmore bars (the first attempt at a sort of healthy ‘granola’ bar) and expectations of a full stomach that night. And we stuffed ourselves for two days eating bread-on-a-stick packed with cheese and jam; at night firing off iron pellets with my sling-shot at the raccoons trying to get into our packs.

We built a secret lean-to mid-way to Canoe Lake and rested up there, doing bushcrafty things, carving spears and wooden spoons, the type of things boys do when they get tired of skipping stones or climbing trees. It was the first time I heard the booming of a barred owl or the eerie chorus of a multitude of loons, squabbling and yodeling like Macbeth witches; the first time I really felt like my own person, a singular being, but a part of something much greater.

We finished up at Canoe Lake and we each bought a full pie at the restaurant.

“You want a whole pie to yourself!” the waitress asked suspiciously. I nodded, I pleaded, eyes watering, hands shaking I attacked the apple pie with unyielding efficiency and determination. The trip was over, sort of… clothes literally falling off us in tatters; shoes held together with bailing twine; dirty (even though we swam every day but never washed with soap); blisters long healed into glorious callouses; the journey was just beginning. And it all started for me in Algonquin Park such a long time ago.

Hap Wilson is the author of 14 nature-related books and the recipient of the Bill Mason Award for lifetime achievement in river conservation, and is a co-founder of Earthroots Environmental group