Counting down the days until ice out in Algonquin Park

You may have heard that we still have lots of snow and ice in Algonquin Park.  This is pretty typical for the first day of spring (March 20th 2017).  Every year we get excited to see open water slowly appear in Algonquin Park, it’s a sure sign that summer’s just around the corner.  Behind the scenes we’ve already started planning and organizing for our park stores opening at the end of April and beginning of May.  (See our Event Calendar for opening dates and other spring events)

We’re also excited to announce a fun Algonquin Park, Lake Opeongo ice out contest this year.  All you have to do is visit the contest page on our website or Facebook, register the date you think Lake Opeongo will be clear of ice and provide your contact information so we can reach you if you happen to be one of our winners.  The contest is open to entries between March 20th (1st day of Spring) and about April 9th.  We say about, because we will need to close the contest before it’s obvious when the ice will indeed be out on Lake Opeongo.  We may close the contest before that date or after it.   So don’t delay get your entry in today.  You can enter online by visiting this link from your computer or mobile:  www.algonquinparkiceout.pgtb.me/K7zTdp 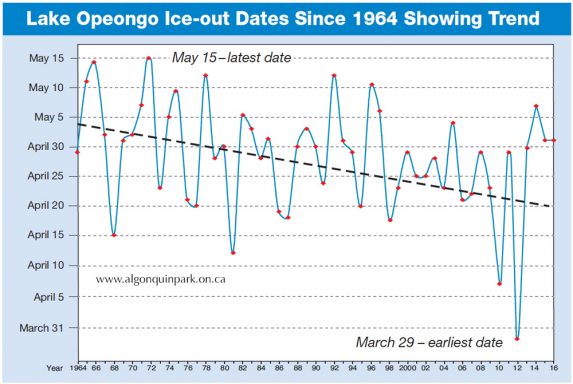 You may be asking yourself, “so when is the ice out on Lake Opeongo going to happen”.  No one knows quite yet but there’s lots of historical data that provides us with the average, earliest and latest dates.  Back in 2012 we experienced the earliest ice out on record (March 29th), I don’t think we’re in for such an early ice out this year.  The latest ice out since 1964 happened way back on May 15th in 1972!  So you’re pretty safe to guess between those dates.  If you want to play the averages you’ll see that currently the average Lake Opeongo ice out date is April 20th.  Not that long ago it was later in April (April 27th), but with the warming trends we are seeing it’s getting earlier and earlier each year.

From the Friends of Algonquin Park: “All lakes in Algonquin Park remain ice covered at the current time. Ice out updates will begin in April 2017 or as conditions warrant. Please check back for updates or review the historic information below.” – www.algonquinpark.on.ca/news/ice-out.php

Our ice out observations on March 19th 2017
As the Friends of Algonquin Park reported all lakes in Algonquin Park are still covered with ice, several rivers are also partially ice covered.  Where there is good flow down rivers and into and out of lakes there is some open water.  Sorry not enough to paddle yet but enough to give a hint that spring has arrived in Algonquin Provincial Park.  With daily temps well into the positive on most days and nights only slightly dipping into the negative numbers we’re hopefully going to see some very spring like changes for the next month.  We’ll be updating this post with current observations on a regular basis over the next 4-6 weeks.

Always remember the ice can change quickly and wearing skis or snowshoes while out on unstable ice can be dangerous.  Please take caution around water this spring.  Rich & Sue were out on Source Lake in Algonquin Park enjoying some spring Nordic skiing.  There’s still lots of great winter left to enjoy.

The park is starting to melt but most lakes are still solid with ice.  These are some of the first photos from Lake Opeongo this year.  Jerry’s report back on Lake Opeongo contained this “I spoke to a reliable source that has recently measured the ice sickness on Opeongo lake… His report is that we currently have 20 inches of excellent ice.”

As part of spring tradition, our owner Bill Swift checked the ice levels on Source Lake in Algonquin Park. Like Wiarton Willy predicts for the terrestrial public, this is how us Ontarian paddlers gauge how long until we can float again.  There is still currently 24″ of ice on the lake. So, suffice to say, Wiarton Willy is a liar.  Anyone have Punxsutawney Phil’s contact info? We’d like a second opinion. (original source)

If you have some 2017 ice out photos you’ve captured recently and would like to share, either upload them through our Submit a Photo page or even just post them to social media and use the hash tag #IceOut2017.  Remember to tell us where and when you captured the photos and we’ll post the best of them here too.

If you’ve already got the paddling bug you can book Ontario Park permits online already into August 2017 and you can always call our 1.800.469.4948 reservations & information line for Algonquin Park canoe trips and rentals.  You can find more information on Algonquin Park and the current weather report right here on our website too.

Be sure to participate in our #IceOut2017 Contest by visiting the contest page and registering your date you think the ice will be off of Lake Opeongo in Algonquin Provincial Park!  This contest is only open from today (March 20th 2017) until around April 9th 2017 (depending on ice conditions).