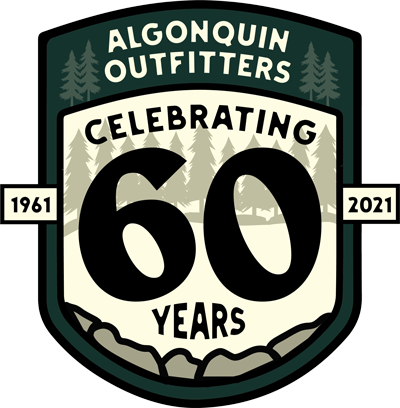 Algonquin Outfitters was opened in 1961 by Bill Swift Sr. (Rich’s father, who was also known as Swifty, Mean Dude or Meanest) and Dave Wainman, a former park ranger. Swifty, a resident of Rochester, New York, had spent many summers in Algonquin Park as a camper and staff member at Camp Pathfinder and as a guide at the Highland Inn on Cache Lake. Wainman was Deputy Chief Ranger of the park then and could see that the time was right to start another canoe livery and outfitter serving Algonquin Park’s main entrance.

The first plan was to locate the business on Cache Lake, near the Highland Inn and the railway station (both torn down long ago). In the end, they decided to set up shop outside of the park at Oxtongue Lake, on the property that was purchased from the Hayden family, owners of the Blue Spruce Inn. The front section of the current Oxtongue Lake store was the original building, which stood near the corner of Highway #60 and Algonquin Outfitters Road, across from the present-day Swift cottage. The first rental canoes were 40 cedar-canvas Chestnuts, delivered by train from New Brunswick. During the first 30 years of operation, Algonquin Outfitters was a seasonal business specializing in canoe rentals and complete outfitting for Algonquin Park canoe trips.

In 1974, the Swift family bought Dave Wainman’s share of the business and, in 1975, Jack and Peggy Hurley became partners and managers for seven years. Jack is now a highly regarded builder of fine cedar-canvas canoes, Peggy still occasionally helps in the AO outfitting department and their sons, Alex and Brent, were valuable staff members for several years. Brent, the only AO staff member who can claim he was born at Algonquin Outfitters, continues to work at our Oxtongue Lake base seasonally as a guide.

When Highway #60 was paved and expanded in the fall of 1978, the original AO building was moved to its current site. There have been about six more additions to the building over the years. In the early years, there was a snack bar serving fries and burgers in the store, but the exhaust fan is all that now remains. Most of the seasonal AO staff lived on the property and a full-time cook provided meals in the “cook shack.” Retail items consisted primarily of T-shirts, fishing tackle, some camping supplies and a few paddles.

In many ways, AO was a trendsetter in Algonquin Park, such as by being the first outfitter to offer lightweight Kevlar canoes. Most of the original rental Kevlar canoes were made by Mad River Canoe, located in Vermont at that time. In those days, there were very few, if any, Canadian companies building good-quality lightweight tripping canoes. In the ’80s, when the Swift brothers Rich and Bill became more involved in the family business, some new dimensions were added. The retail side of the store began to expand as Rich and wife Sue sought out more modern camping equipment and clothing to offer to AO customers. As well, in response to the popularity of Kevlar canoes, the Swift Canoe Company was founded and licensed to build Sawyer Canoes, which was a key U.S. brand.

By the early ’90s, it was clear that there was a need for a canoe created specifically for Algonquin Park canoe tripping. The Kipawa was the first model designed and built by the Swift Canoe Company; it’s still in production and remains a popular rental canoe. The original canoe factory was located in the building that now houses the AO canoe repair shop and Swift sales office at Oxtongue Lake. Now, the Swift Canoe & Kayak company has a large factory in South River and their main office is on Highway #11, near Gravenhurst.