Easily the most unusual canoe route in Algonquin Park and possibly the most challenging.

What is the Meanest Link? 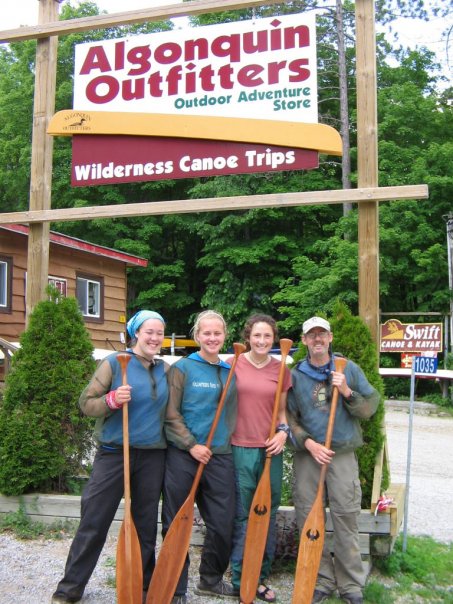 The Meanest Link is a canoe route created to honour the memory of Bill Swift Sr., one of the founders of Algonquin Outfitters. Swifty, as he was most often called, had other nicknames, such as Mean Dude or Meanest, which were a tribute to his gruff exterior persona. How he got those names is another story.

“The Link” was dreamed up by Alex Hurley and Gordon Baker in the summer of 2004. The trip consists of five challenging canoe routes connecting the four Algonquin Outfitters stores serving Algonquin Park: Oxtongue Lake, Brent, Opeongo and Huntsville. Meanest’s love of canoe tripping and numerous feats of endurance on the trail were legendary, so Gord and Alex felt that a canoe route linking Algonquin Park and Algonquin Outfitters would be an appropriate way to honour him. Paddlers must follow a prescribed route between each location and adhere to a few traditions along the way. Each section of the trip must be done as a single canoe trip, with the exception of the Huntsville/Brent leg which, due to the difficulty and time required, may be split into two sections. Ambitious paddlers with time on their hands can attempt to complete the full five-part link during one canoe trip, totalling approximately 420 km or 261 miles .

While the Link is not intended to be a speed trial, several amazing feats of marathon paddling have been recorded. Chris Bosworth and Rob Finkbeiner, for example, left the Brent Store at 4 am (in fog and darkness) and landed at our Opeongo store 17 hours later. The average canoe tripper would probably take at least four days to do the route down the Petawawa River, up the Crow River to Lake Lavielle and over the famous Dickson-Bonfield portage to Lake Opeongo. Jon Wilke and Brad Coultes paddled from Opeongo, through Oxtongue Lake to Huntsville in just under 30 hours. These two sections contain many portages and route-finding challenges, not to mention the mandatory stops at Camp Pathfinder and Oxtongue Lake. On the other side of the coin, several parties have had misadventures along the way, frequently due to underestimating the challenges of the route. These paddlers shall remain nameless. Anyone who attempts the route should be celebrated for trying and, if necessary, having the good sense to call it quits.

In the fall of 2004, the first attempt to do the route as a single continuous loop trip was accomplished. Up until then, no one had attempted the Huntsville/Brent leg, let alone the entire route. The Huntsville/Brent section goes up the Big East River to Algonquin Park’s western boundary, up the edge via McCraney, Rain, Ralph Bice and Big Bob lakes to the Nipissing River, then down “the Nip” to Cedar Lake and the Brent Store. This is a TOUGH section. Except as a spring whitewater run, the Big East is rarely travelled upstream of the Williamsport Road bridge. Will Lougheed and Randy Pielsticker tried to complete the whole loop in early November 2004 but had to cut their trip short due to bad weather, low water and the fact that they were running out of food. Given the marginal weather, short days, unknown terrain on the Big East River and challenging conditions in general, their accomplishment is significant.

In June of 2005, four determined young women quietly booked time off work, planned, packed and started paddling from Oxtongue Lake. Fifteen days later, Janet Thomas, Jaime Capell, Sarah Strickland and Leah Sanders became the first party to complete “the Full Link” as a continuous canoe trip. Their timing was chosen to give them ideal water levels, at the cost of travelling in peak black-fly season. For the full story of the Meanest Link and a detailed account of their trip, as written by Huntsville writer Don McCormick, please start at “Meanest Link, part one” on our blog and go from there. Since then, many staff members have done sections of the Meanest Link, more Full Links have been completed and, best of all, participation in the Meanest Link has extended beyond Algonquin Outfitters staff to include customers, friends and Full Link groups from Camp Pathfinder.

In June of 2008, Will Lougheed and Chris Bosworth set out to become the second group to complete the full link. Leaving in early June, Will and Chris gave themselves 14 days and two food drops to complete the trip. Their dear friend Clarke Wallace passed away the day before the trip, so the carbon/Kevlar Mattawa canoe (made by Swift) the duo used was named C.W. 1 in his memory and the trip was dedicated to him.

With Clarke looking on from above, the waters stayed calm, the weather clear and the trip was very positive overall. Will and Chris travelled an average of 14 hours a day under gruelling conditions, experiencing sunstroke and a bit of footrot. However, their determination overcame all adversity and they completed the Link in just nine days. The time they set is a record that proved hard to beat! Chris and Will have vowed that, should their record ever be beaten, they would do the trip again but, this time, do it in old-school tripping fashion with cedar-canvas canoes, canvas packs and only gear that was used the year the company was founded, 1961.

You can even join the Meanest Link community on Facebook!

On Aug. 3, 2018, Alex and Noah attempted to complete Algonquin Park’s Meanest Link in nine days. The trip was in support of Project Canoe where the pair hoped to raise $2,500 to help create opportunities for adventure in underprivileged youths’ lives. They actually finished the Full Link in just 8.5 days!

Once Around Algonquin Park – Kevin Callan

Renowned paddler and author Kevin Callan, better known as “The Happy Camper,” took on the Meanest Link in June of 2013 with his good friend Andy Baxter, but this duo tackled it in their own unique way.
Read more on Kevin’s Blog at Explore Magazine.

The route of the Meanest Link

The route outlined below are written for the paddler going in a clockwise direction. In our opinion, going clockwise takes the best advantage of elevation gains and losses. However, there’s no reason why you can’t go the other way, particularly on a single-section trip. Please note that some lake names have been abbreviated to save space. Thanks to Camp Pathfinder for compiling this detailed trip outline! 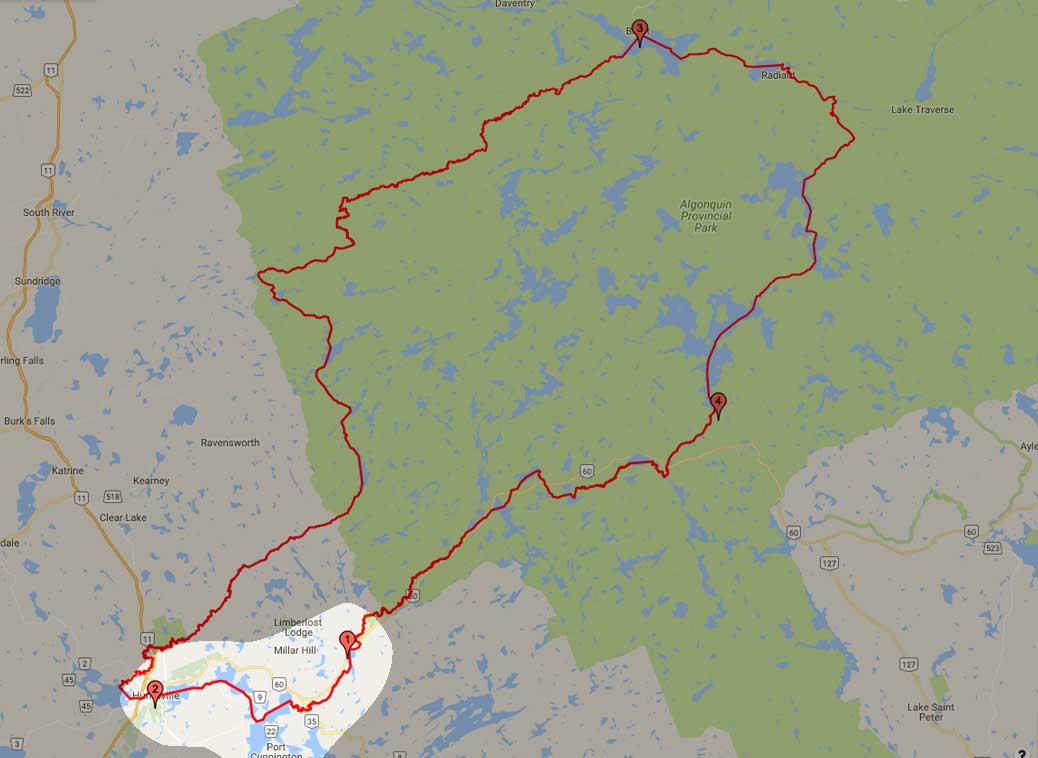 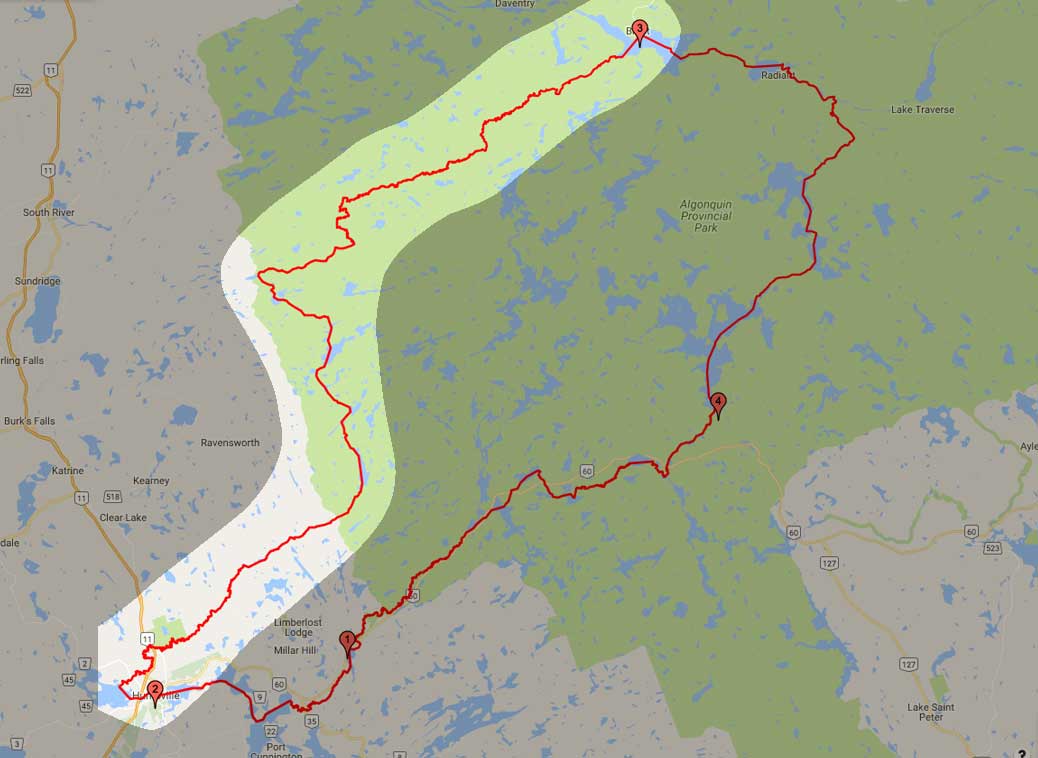 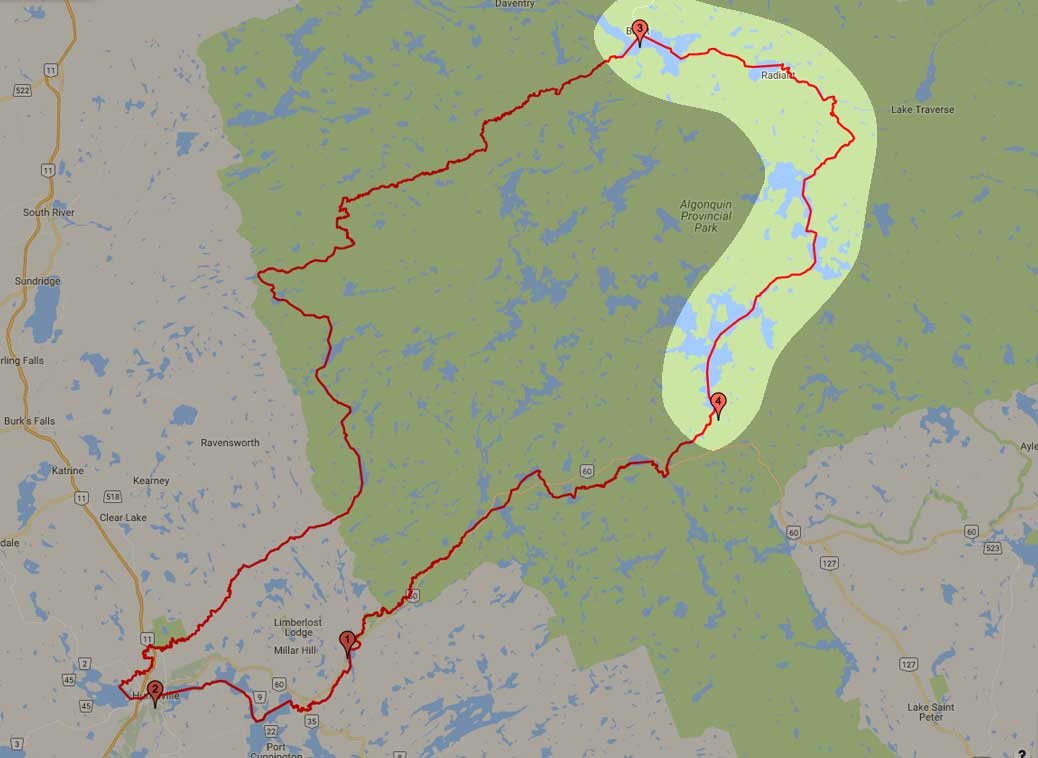 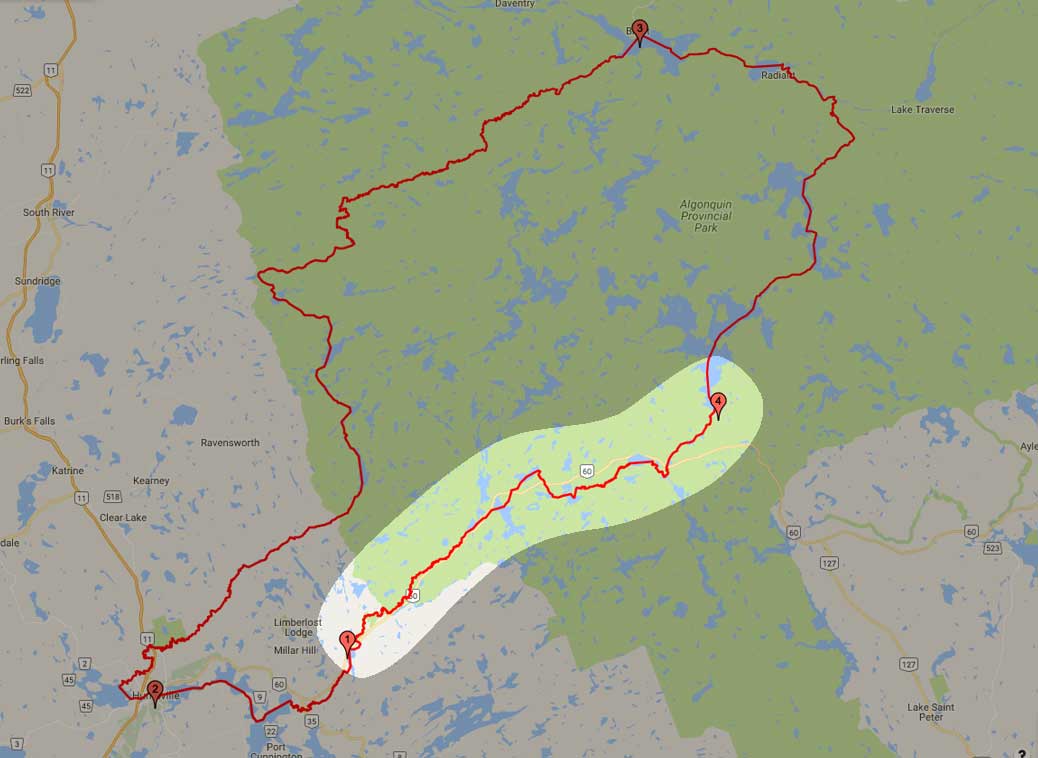 The Rules of the Link

There are not many rules but they are important to the spirit of the trip:

Those who complete the Meanest Link are recorded in the list below, note we do not record how many hours it took to complete because it is not a race, it’s all about the journey and the experience.  Anyone participating in the Meanest Link are required to follow all of the Algonquin Park rules including booking permits for campsites along the route.