The History of Algonquin Outfitters 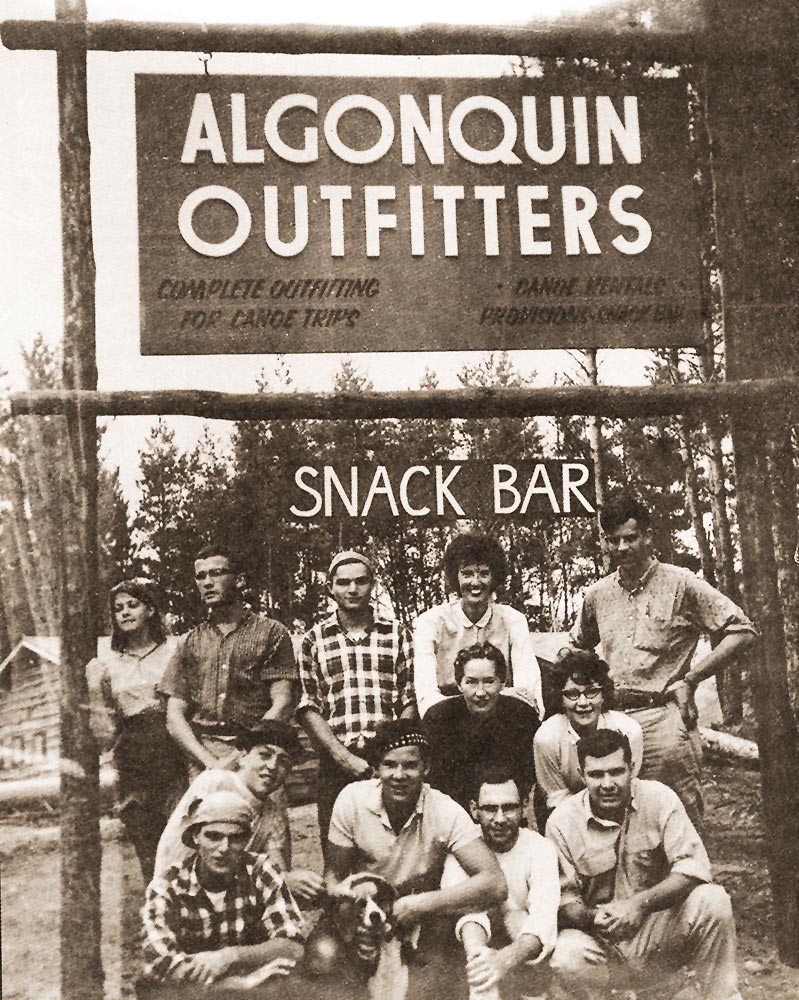 Algonquin Outfitters, like most businesses, started small. The first location was opened in 1961 at Oxtongue Lake, Ontario, by Bill Swift Sr. (better known as Swifty, Mean Dude or Meanest) and Dave Wainman, a former park ranger. AO’s inaugural rental fleet was made up of 40 cedar-canvas Chestnut canoes, delivered by train from the factory in Fredericton, New Brunswick.

Initially, the partners had planned to locate the outfitting business in Algonquin Park, at Cache Lake. However, the late Jack Hayden, owner of the Blue Spruce Inn, offered his friends a small piece of land at Oxtongue Lake, a newly developed cottage and resort community just beyond the park’s western entrance. Swifty and Wainman realized that operating costs would be much lower outside the park, so they bought the land. Hindsight has shown that this was the right decision!

The front section of the current Oxtongue Lake store was the original building, located at what is now the northeast corner of Highway #60 and Algonquin Outfitters Road. When the highway was paved and expanded in the late ’70s, the structure had to be relocated, so Algonquin Outfitters purchased an additional parcel of land from the Hayden family. The building was moved to its present site and, in subsequent years, there were about six additions. Not long after this move, the Swift family bought Dave Wainman’s share of the business and, during the ’70s and ’80s, Jack and Peggy Hurley were AO partners and managers. Since then, Peggy has continued to help in the outfitting department from time to time and their sons Alex and Brent have been valuable staff members and canoe trip guides.

For the first 30 years of operation, Algonquin Outfitters was a seasonal business with only one location, specializing in canoe rentals and complete outfitting packages designed for Algonquin Park canoe trips. In the early days, there was a snack bar in the store that served burgers and fries; the exhaust fan is all that remains of this venture. Most of the staff lived on the property and a full-time cook provided meals for them in the “cook shack.” Retail items consisted primarily of T-shirts, fishing tackle, some camping supplies and a few canoe paddles.

As the first outfitter to offer lightweight Kevlar canoes, AO was a trendsetter in Algonquin Park! Most of the original Kevlar rental canoes were made by Mad River Canoe which, at that time, was located in Waitsfield, Vermont. In those days, there were very few, if any, Canadian companies building good-quality, lightweight tripping canoes. In the 1980s, when Swift brothers Rich and Bill Jr. became more involved in the family business, some new dimensions were added. The retail side of the store began to expand as Rich and his wife Sue sought out more modern camping equipment and clothing to offer AO customers. As well, in response to the popularity of Kevlar canoes, the Swift Canoe Company was founded.

Swift initially began building Sawyer Canoes, a popular U.S. brand (under license) but, by the late ’80s and early ’90s, it was becoming clear that a canoe created specifically for Algonquin Park tripping was needed. With Bill Jr. at the Swift Canoe Company helm, the first model was designed and built with Algonquin in mind. This special canoe, the Kipawa, is still in production and remains a popular rental model. The original Swift canoe factory was located in the building that now houses the AO canoe repair shop and the Swift sales office at Oxtongue Lake. 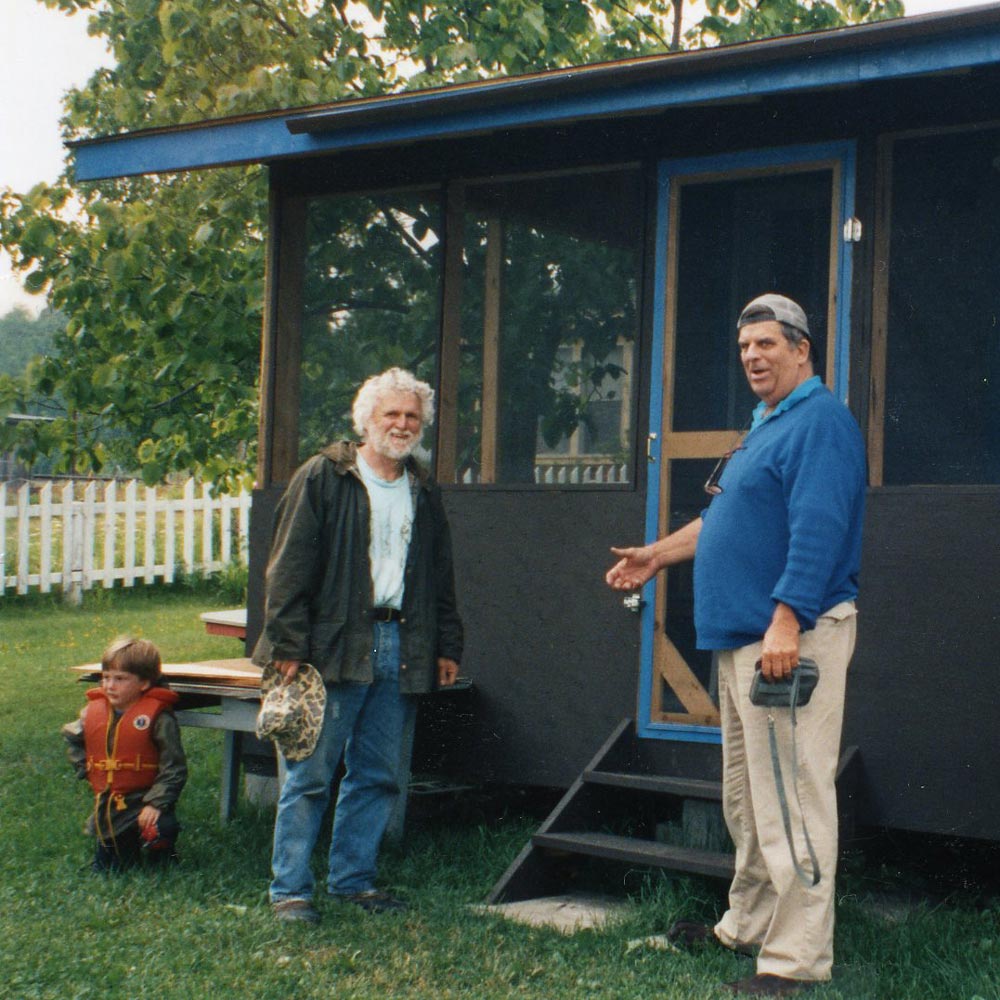 In the 1980s, AO expanded in several other ways. Jake Pigeon, one of the few people who can truly claim to have grown up in Algonquin Park, was asked to take over the Brent Store when former owner, Gerry McGaughy, was ready to sell. Since then, Jake has lived on-site every summer, welcoming AO customers to the Brent Store, which is unique in Algonquin Park because it’s privately run, although it sits on land owned by the Canadian National Railway. All other outfitting stores in the park (like the Portage Store and AO’s Opeongo Store) are operated by private businesses but the property is owned by the provincial government and each store is run under contract to Ontario Parks.

AO won the contract to run the Lake Opeongo concession in 1989 and has held it since then. Jerry Schmanda, who had worked seasonally at AO prior to this, began managing the Opeongo Store in 1989 and, now, manages the Lake of Two Rivers Store/Cafe & Grill. Around 1990, with both Jerry and Rich now working year-round, the Oxtongue Lake location began remaining open through the winter, adding warmer sleeping bags, cross-country skis and snowshoes to the rental list. Gord Baker started in 1992, becoming the first person at AO to be hired specifically as a year-round management employee. Bookkeeper Carolyn Misener joined the team the following year.

The Huntsville store was added to the mix in 1994. Now situated on Main Street, backing onto the Muskoka River, the original location was on the opposite side of the street, just up the hill a bit. After moving to its current site, and then moving out temporarily while the historic building was completely renovated, the Huntsville store took off! The bike and snowboard sections, which were completely new categories of merchandise for AO, have added an exciting dimension to the business. With the momentum provided by this store, many new year-round employees have joined the AO team and several new locations have been added to the lineup.

In 2004, Algonquin Outfitters won the concession to operate the Valley Shop, a small winter-only retail outlet at Huntsville’s ski hill, Hidden Valley Highlands Ski Area. The following year, a retail opportunity presented itself in another Muskoka town: AO Bracebridge, then known as Swifty’s Surf and Snow Shop, opened on Manitoba Street to serve the local and tourist population of that community.

Since that time, AO has continued to grow. AO Boatwerks, a pair of paddling shops in Minden and Haliburton, became part of the fold, and seasonal shops at Port Carling, Gull River, and Sir Sam’s Ski Hill enhanced the roster. Most recently, AO took over operation of the Lake of Two Rivers retail store, café, and grill on Hwy 60 in the core of Algonquin Park, and it has expanded its Bracebridge, Haliburton, Minden, and Port Carling locations.

Swifty and Wendy instilled a love for the outdoors in their three children, a passion that remains at the core of Algonquin Outfitters today.

Now a three-generation, family-run business with Rich and Sue Swift at the helm, Algonquin Outfitters has never wavered from its goal to bring as many people as possible to the outdoors.

Rich went to Camp Pathfinder as a child, too, where he further developed his love for Algonquin Park and canoe tripping. In 1976, he brought that passion to Algonquin Outfitters and began working his way up through the ranks of the company. He began at the bottom, as a canoe-scrubber and canoe tie-down boy, and through the years learned every aspect of the business that he would later lead into the future.

Rich credits his mentor, Jack Hurley, with showing him how to work with people, and Swifty with trusting his son’s vision for what Algonquin Outfitters would become. It was Rich who saw the potential for AO’s retail operations, and who, along with his wife Sue, has grown it into a year-round business that perfectly complements its canoe-tripping roots.

Rich and Sue met in university at an outdoor program. They have always loved exploring waterways, and together passed that passion on to their own children, Jessica and Tanner. Swifty always told Rich, “do what makes you happy in life,” a philosophy he and Sue have shared with Jess and Tanner.

Like their father and his siblings, both Jessica and Tanner have worked at Algonquin Outfitters. Tanner, along with his fiancée Hannah, continues to follow in his father’s footsteps, helping people expand their own love for the outdoors.

It’s not uncommon to encounter staff who have been with Algonquin Outfitters for decades. They share the Swift family’s passion for the outdoors. For them, it’s not just a place to work—it’s a way of life.